Bounces back after loss to Thomas More

By Markus Miller
TU lost a tight game against Thomas More, but had an impressive outing against Governors State the next day.

The Taylor men’s basketball team split its two contests last weekend, falling to Thomas More College 65–59 on Oct. 30 and defeating Governors State University 95–69 on Oct. 31. The results brought the Trojans to 2–1 early in the non-conference portion of their schedule.

Friday’s game with Thomas More pitted Taylor against last year’s top-rated defensive team. The game finished with a low-scoring output, and the Trojans were held to only 11 points in the first ten minutes of action.

“I really credit (Thomas More),” Andrews said. “They take a lot of time offensively, and really grind and screen you. They turn it into a possession game, and they were just really stingy early, and they did a magnificent job of disguising and changing defenses.”

Taylor managed to cut the deficit to 22–29, after a 3-pointer from senior Vincent Miranda, but the Saints closed the half strong and took a 15-point lead into the break.

Juniors CJ Penha and Jason Hubbard scored 11 of the next 12 points for Taylor, and after a triple from freshman Kaden Fuhrmann, they cut the score to single-digits. Taylor was eventually able to get it within seven with a little under three minutes remaining, but couldn’t overcome the deficit.

“That was a good matchup for us,” senior James McCloud said. “It was a good test for us to have because we’re going to be facing teams like that. It prepared us to bounce back the next day against Governors State.”

Penha and Hubbard combined for 32 points and 15 rebounds, with Penha collecting a double-double with 17 points and 10 rebounds.

Saturday’s game was a drastic turnaround offensively, with Taylor shooting 56.7% from the field in the 95-point showing. The Trojans never trailed and a 14–0 run spanning the end of the first half and the beginning of the second half distanced them from Governors State for good.

Nine players scored for TU, including four in double-figures. Hubbard put up 27 points and 6 rebounds. Penha tallied 17 more points, Miranda scored 12 to go along with 6 assists, Fuhrmann added 15 points off the bench, and McCloud and sophomore Zach Baugher combined for 16 points and 10 rebounds in rounding out the starting unit.

Through three games Hubbard has a scoring average of 25.7 points per game. The junior forward has upped his offensive output significantly in the first weeks, leading the Trojans in scoring. Hubbard stands at No. 18 in the NAIA in scoring average. TU has also improved their team offensive numbers from last season, despite losing two of their leading scorers in Mason Degenkolb and Ryan Robinson from the 2019–2020 campaign.

“He’s one of those guys who’s always working,” Baugher said of Hubbard’s offensive numbers. “It’s a testament to his hard work. He’s just a fierce competitor.”

Hubbard and the Taylor offense are doing all of this while trying to implement a new offensive system this season.

Andrews is hoping to take advantage of this team’s strengths with the new system and incorporate the size and versatility of the starting lineup.

“We think we could be really tough running this system,” Andrews said. “I’m very pleased with our spirit, and embracing a new system, because it’s never easy. But, we think this fits our talent  pretty strongly.”

Andrews said the coming weeks will be crucial for the team, and that he hopes to see improvement each day on both sides of the ball.

TU will need to make sure they’re in rhythm going into the conference season, which starts the Saturday after Silent Night on Nov. 21 against Huntington University. The Crossroads League contains multiple nationally-ranked teams and is widely regarded as one of the toughest basketball conferences in the NAIA.

“In conference play, we really talk about doing the right thing longer than the other team,” McCloud said. “It’s a good conference, so it’s about doing it right, because games are going to be close, and you have to find a way to win the next play.” 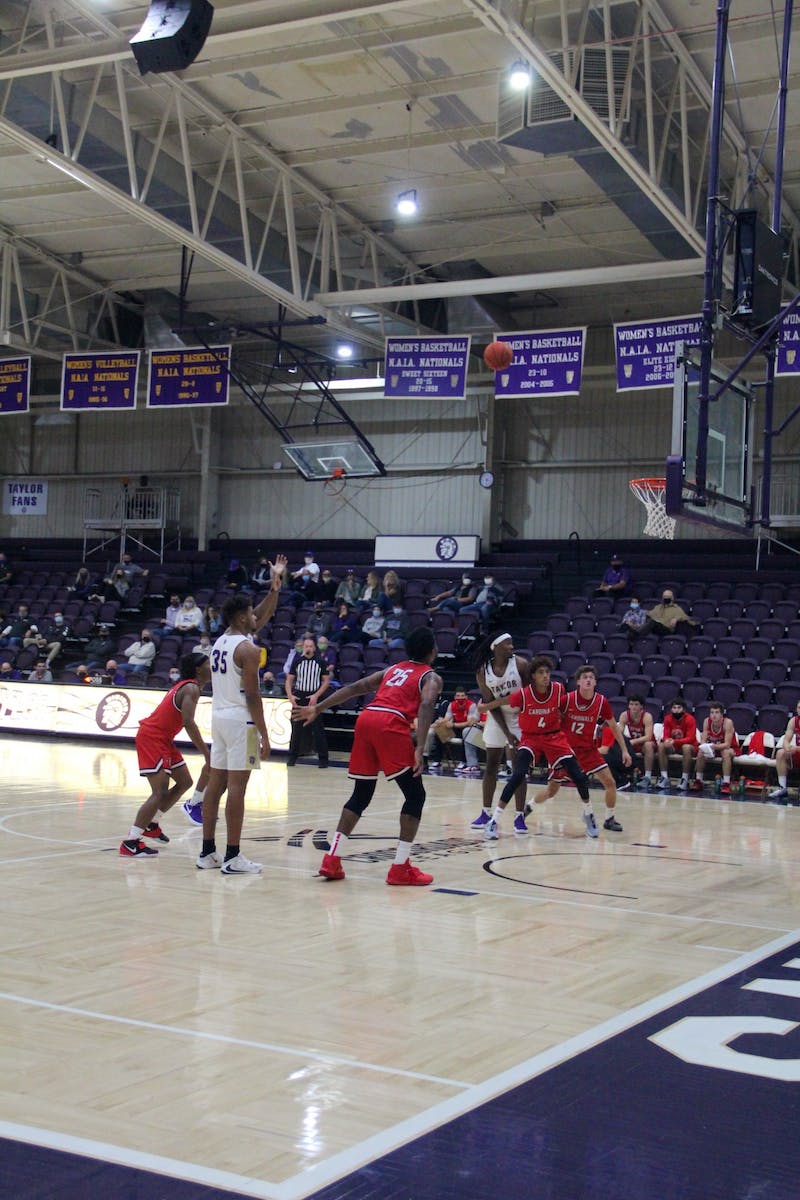