The women's basketball team has a near historic start to season

With a win against Great Lakes Christian College last night, the Trojans have started off their season 8-0. According to Head Coach Jody Martinez, that would be the best start to a season since the 1950s.

One of the keys to securing the win over Indiana University East was senior Abby Buchs. In an efficient performance, she scored a career-high 30 points, shooting 9-13 from the field and 9-10 from the free throw line.

The Trojans’ quick start set the tone for the game as they scored 31 points in the first quarter. While Abby led the team in scoring, the team as a whole was dominant on offense as they posted the second highest score of their season.

Senior Becca Buchs scored 19 points with 12 coming off of her team-high four three-pointers. Junior Madisyn Fischer and senior Sydney Huffman got into double-digit scoring with 12 points each. Fischer also led the team in assists with five.

“The really good passes were what set us up,” Abby said. “Just the trust we have in each other to make the extra passes to each other.”

Fischer seconded the importance of ball movement in the offensive success and how the additional passes allowed for good looks at the basket. This allowed for the team to shoot 46.6% from the field and 41.4% from three, both of which were higher than the current team averages.

The Trojans have nearly doubled their opponents in assists throughout the season, averaging 16.6 while keeping the opposition to 8.9.

Taylor has also maintained an impressive 19.7 scoring margin over their opponents, and while this was their first true road game, the Trojans maintained a double digit lead throughout the majority of the game.

In the fourth quarter the Trojans built up a 15-point lead, the largest of the game.

However, Indiana University East didn’t give up. With one minute and six seconds remaining the Red Wolves scored six unanswered points in 11 seconds to bring the game within five points.

The calm free throw shooting by Taylor, making 10 out of 12 attempts, allowed for the Trojans to regain a 13-point lead as the time ran out.

“We knew that they were going to be a physical team,” Abby said. “We just kept attacking the rim, staying aggressive and we were able to get them into foul trouble early.”

This was the Trojans’ first time playing at Indiana University East this season and this was also their first game on the road at the opposing team’s stadium. The only two road games Taylor previously played were on a neutral court for the Indiana Wesleyan Classic.

While the team is No. 15 in the nation, Martinez doesn’t want to be too eager.

“It is still early in the season, we will have a better idea of what this team can do around Christmas break,” Martinez said.

The Trojans will face Marian University at home on Tuesday, Nov. 26, at 5 p.m. This is their first Crossroads League opponent and currently the No. 6 team in the nation.

Historically, Marian has had the edge, winning 21 out of 34 games since the stats began to be recorded in 2005. 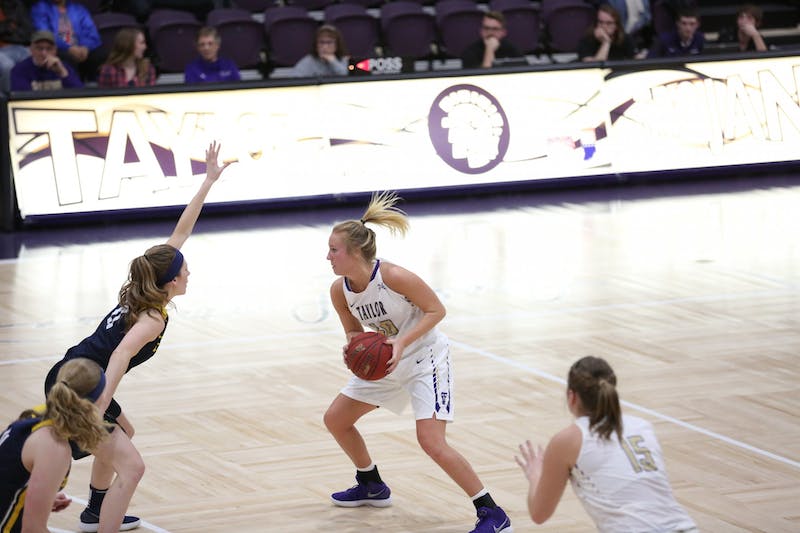