“Actors, by and large, are looking for authentic embodiment of characters so that storytelling is alive, and has potential to, move beyond the stage and into the awareness of the audience,” said Tracy Manning, Theatre Department Co-Chair and Assistant Professor of Theatre Arts.

For each Taylor Theatre production she directs, Manning selects an acting methodology for the actors to apply during the rehearsal process.

In the case of the upcoming production of Conor Mcpherson’s "The Birds", she chose the active analysis method, which was developed by Konstantin Stanislavski, a prominent figure in the history of theatre.

“What [Stanislavski] found was that when he sat around the table with actors and they talked about the play and they came in with all their lines memorized, that then there was a falseness to their performances that he was trying to find a way to leap over,” Manning said. “And he found this, this process of trying to get actors on their feet as early as possible so that they're not intellectualizing the text, but they're trying to live in it.”

Stanislavski’s methodology was applied in rehearsals for "The Birds" using Etudes, which involves breaking down the script into sections and studying them. The actors would read the section and immediately step into the scene without having time to analyze the circumstances. The intended result is to have authentic actions, not ones the actors plan in their heads.

Striving for this authenticity requires vulnerability, a challenge the actors had to face. Senior Steven Day, who plays Nat in the play, described the result of having to step right into the scene.

“You can't really hide,” Day said. “You have to lay everything out on the table because you can't think through anything.”

He further explained that things feel much realer for him since he embodies the character before psychoanalyzing the scene. He said it can be difficult to experience things so fully, especially since his character has a lot of anxiety and, in some scenes, is in fear for his life.

Something that separates this process from previous ones is the emphasis on group work affecting each individual’s choices. Day recalled his preparation for the role of Atticus in "To Kill a Mockingbird" was primarily done by himself, analyzing the character and writing in a journal.

For "The Birds", he explained that in the discussion of each scene, actors have the opportunity to make suggestions for their peers. As a result, he said that his final performance of Nat contains parts of other people’s ideas as well as his own.

Senior Eleana Manning, who plays Diane in the play, expressed similar thoughts on the communal work during rehearsals. She appreciated the input of her peers and the safe space they have been able to create together.

“It's just so easy to get discouraged,” said Eleana. “And this process, there are moments where I've been discouraged but I've never been, like, left there for very long, because I have this great community of people who, like, come around me and provide encouragement.”

Although the process has been challenging, Eleana and Day both felt that the hardships make the final product more rewarding.

“You have to risk much to gain much, right, and so it costs something,” Eleana said. “And the return is, in my opinion, way more than the price I've ever paid to make good art, but in the moment, it costs me something.”

Psychological Thriller "The Birds" opens in Mitchell Theater on September 15. 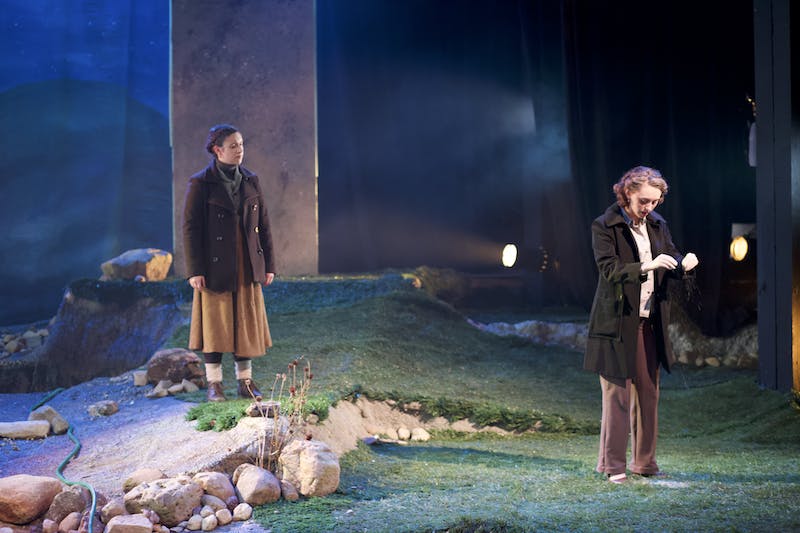