Whether they have an experienced adviser or not, Taylor’s Ethics Bowl teams plan on getting to the national competition this year.

Despite the change in leadership, Taylor’s Ethics Bowl teams have been going ahead with practices, and are planning on competing this year. Junior Stephen White said practices can still go well because the members and captain lead most of the practices anyway.

While the adviser does engage with the team, they don’t do so constantly like a sports coach. Instead Spiegel let the team do most of the work during a practice, and would step in occasionally to offer more insight into a situation. Much of the interaction is between the under and upperclassmen, so they get to know each other and are reliant on themselves, not the adviser for solutions.

Kuzma, the assistant sponsor, has been the main faculty member in charge of the club, and Ethics Bowl president and senior Reilly LaRose has also stepped up his role. Other faculty are stepping in to fill the temporary gap.

“I’m very proud of my teammates and Abby Kuzma, and some other philosophy professors have also been helping and supporting us in the background a little bit,” Ethics Bowl vice president and junior Elizabeth Hammond said.

Even though things are still running in Ethics Bowl and the philosophy department, they are short several staff members, and Verhagen’s coming will be appreciated.

Verhagen graduated from Taylor with a B.A. in philosophy in 2011, so this will not be his first time on campus. His coming was delayed though, by two weeks of quarantine in Michigan after he arrived in the U.S. from Scotland.

Schools had to be registered for regionals by mid-September, so that is already taken care of for Verhagen. He’ll only have about a month on the job before his club is ready for regional competitions, which will be virtual this year.

This year, Taylor will be sending two teams to regionals, and hopefully making it to nationals. Only one team needs to qualify for everyone from the school to go. If they make it, it will be Taylor’s 11th year in a row to qualify for nationals.

“It’s just really exciting to see that we have enough people who present three teams,” Hammond said. “Last year we had a team of three. In my freshman year, we also only had two teams, so being able to have three teams of four people is like, wow, that’s a lot more than we ever have had, this is really exciting.”

Unfortunately, a recent rule change has dictated that Taylor can only send two teams to regionals, but at least they will be full and have substitutes.

Teams are allowed to have three to five players in at a time, but they may carry subs. Schools that reach nationals are allowed to change around their team members if they want to create the strongest combination.

In the week or so before regionals which will be Nov. 14 this year, Ethics Bowl is planning on holding a mock competition with their teams facing each other. People are welcome to come and see what the club looks like in action.

“I’ve been really proud of how we’ve all come together to continue Ethics Bowl, and just keep it at its core of what it’s about,” Hammond said. 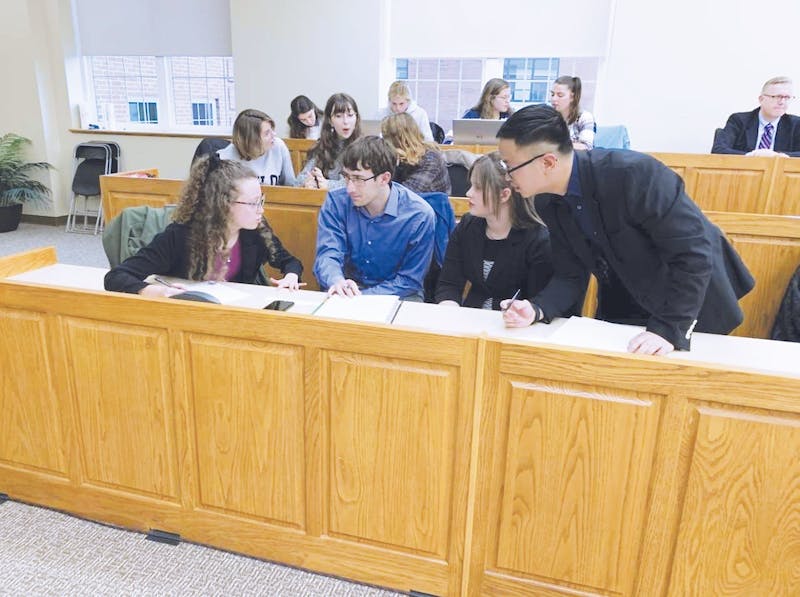