A look back at this year's women's basketball team

Plenty of intrigue surrounded Taylor hoops this season. For this year’s Taylor women’s basketball team, records and accolades seemed to be collected on a nightly basis.

From achieving the best winning percentage in program history to scoring more points in a single game than ever before, this Trojan team continued to raise the bar each night. Head Coach Jody Martinez had a historic group on the court this year, featuring seniors Abby Buchs, Becca Buchs, Haley Stratman, Jamie Netzley and Sydney Huffman.

Before the season was cut short, the Trojans had amassed a 30-4 record, going 15-3 in the Crossroads League. Odle Arena was a fortress this season, as the ladies went an astonishing 18-0 in Upland. 22 games into the season, there was still a zero in the loss column, the best start in program history.

Against Bethel University, the Trojans set two program single game records; the most points scored, 120, and the most three pointers made in a single game, 23. This performance was a part of the still-active 29 game home win streak that Martinez and his team have upheld.

Better yet, the ladies bested Taylor’s rival Indiana Wesleyan University (IWU) twice, once in a 20-point comeback and once on senior night. Netzley highlighted two of the most exciting games in her review of the season’s best moments.

“The two games that come to mind are the comeback game at IWU, and my steal that led to (Becca Buch’s) winning 3 vs MVNU,” Netzley said. “Those games really showed people that we never give up and you can never count us out.”

In the final game of the season,the Trojans displayed their fighting spirit one last time in an overtime win against Union College. The only thing that stopped them from competing for a national title was a force of nature no one saw coming.

They followed up last season’s 30-5 record with a better winning percentage this season at 30-4. Many didn’t think they could replicate last season’s success after the graduation of several key players, including NAIA All-American Kendall Bradbury, but they did.

“We had some great team accomplishments from this season, but I think the best one was having the winningest record in (school) history,” Becca Buchs said. “We are so proud of that because it shows the commitment and hard work from top to bottom and how valuable everyone on our team was. I believe we were going to make a great run in the national tourney. Although that was cut short, I'm proud of what we did.”

All the records, all the achievements and all of the memories of this season will live on in Taylor athletics history for years to come. The entire team accomplished great feats, but the historic senior class led the way.

This year’s graduates posted the highest four-year win total in program history with 97. They created history, as Taylor made it to three straight NAIA National Tournaments in a row for the first time ever.

This class led off the court as well, with the Buchs twins achieving CoSIDA Academic All-American honors.

Due to COVID-19, this team didn’t have a chance to finish their historic run. Martinez provided a great story that shows the mentality that this team had.

“I am so proud of them, especially the way they handled the news at the national tournament when it got cancelled,” Martinez said. “We were preparing at practice to get ready for our next game which was in the sweet 16. There were a lot of hugs and tears. This team decided to practice and finish their season on the basketball court together!”

To the bitter end, the team worked hard and achieved unprecedented feats. They will go down in the Taylor record books, and their many accomplishments will live on in the Odle rafters. 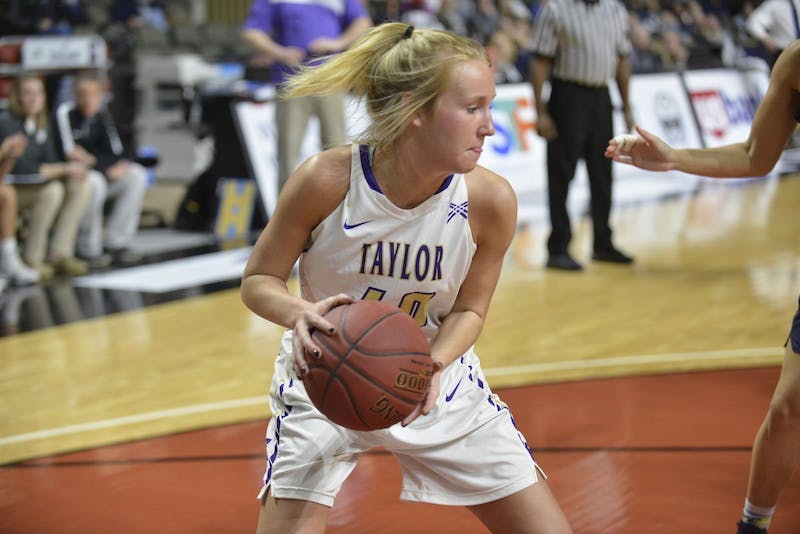