Taylor moved on in nationals with their win over Union

While it was not the way they wanted it to end, the Taylor women’s basketball team ended their season with a win.

In a thriller of a game the Taylor women’s basketball team outlasted Union College for a 68-66 win in overtime on Wednesday in the first round of the NAIA National Championship being held in Sioux City, IA.

However, due to the COVID-19 (coronavirus) outbreak, their season was cut short after the announcement that the NAIA winter championships had been cancelled.

The team received the news upon the arrival to their practice session.

“We got the news and we had a little team meeting about it.” said Head Coach Jody Martinez. “I just said, ‘this is not the way we’re going to end it. We’re going to practice and we’re going to give these seniors a last chance to play together.’ So we practiced for an hour and the atmosphere was great. Attitudes were great.”

Wednesday’s game gave the winningest senior class in program history a chance to win one more.

Senior Abby Buchs moved to 16th all-time on Taylor’s scoring list as she led all scorers with 25 points and six rebounds. Buchs was integral late in the game with 15 of her points coming in the second half, one of which was the last free throw to seal the game.

In a season where the Trojans have enjoyed a comfortable 14.4 scoring margin, they had no such luck this game. There were 13 lead changes, three of which happened in the fourth quarter.

The win marked the second straight 30-win season and third consecutive appearance in the sweet sixteen for the Trojans.

“Union was very athletic and did a great job defensively on us,” Martinez said. “Proud of my team and not panicking through some tough moments.”

In such a close game, staying out of foul trouble and limiting Union College to only 10 free throw attempts was critical.

The Trojans struggled behind the arc only shooting 8-26. Throughout the season they led the NAIA in 3-pt percentage at 40.7%, but on Wednesday Union shut them down to 30%.

However, the Trojans persisted. Senior Jamie Netzley scored all 12 of her points in the final three periods, two of which tied the game again in overtime before Taylor regained the lead to secure the win.

Senior Becca Buchs was a catalyst in the first 20 minutes shooting 4 three-pointers for her 12 points in the game. This marks the 61st straight game where Buchs has made a three-pointer and added to her season total of 130. Buchs also led the team in rebounds with 9.

The Trojans were set to face the third seeded no. 9 Indiana Tech on Friday. With a win, they would have advanced to back-to-back elite eights.

“God’s in control of everything,” Martinez said. “Our faith is going to get us through this. The positives are this team ended their season and the seniors ended their careers with a win.”

This season was a special one for the women’s basketball program. No one can be sure how far they would have gone in nationals, but there were plenty of highlights.

After going 30-5 last season and losing many of their leading contributors, the purple and gold didn’t miss a step and went 30-4 with a perfect 18-0 home record. Martinez hoped the cancellation of the tournament doesn’t take precedence over everything that was accomplished.

“These girls came to practice each day wanting to get better,” Martinez said. “Records were broken. How can you not enjoy what they did out there.” 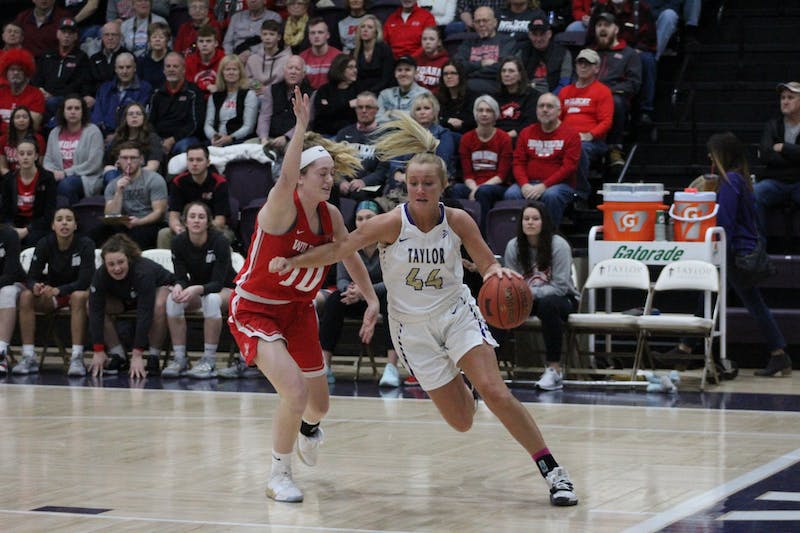