Sports away from Taylor: Part 2

How fans, administrators and the media are handling life without sports

Taylor has cancelled all sports through the 2019-20 academic year

Furloughs, new responsibilities and a massive shift in the sports media industry all seem to be strong side-effects to the war COVID-19 is waging on sports. While coaches and athletes seem to be the most affected on the surface, those behind the scenes have been just as unfortunate.

Most in sports media are still employed ... for now.

Gannett, owner of many newspapers within the United States including the Columbus Dispatch, announced furloughs on March 30. According to the Washington Post, certain employees at over 100 newspapers paid more than $38,000 a year would have to take one week of unpaid leave in April, May and June.

Oller falls in that category. It’s the first time in his professional career he’s had to deal with something like this.

With the decline of print media already at hand, no one knows what kind of impact this virus could have on the world of sports media. While print circulation and online viewership have both risen since COVID-19 has picked up, Oller is wary this won’t last. He said long-term, this could hasten some of the general declines within the news industry.

While the sports section in newspapers followed the news section in newspapers and reported all of the COVID-19-related cancellations for a while, it’s started to return back to its roots and provide people with entertainment and a distraction. Now that people are informed on the virus, they want to go back to reading about sports.

But with no sports to write about, creativity has taken over.

“I'm writing in some ways, at least now, lighter,” Oller said. “We’re (sports media) escapism. We’re kind of like the Netflix of news. Sports in general is an escape for people. In some ways, I’ve enjoyed this. It’s allowed some creativity.”

Readers have had to resort to getting their sports fix from top-ten lists, virtual tournaments, historical stories and replays of old games.

Still, while this kind of content may help quench a sports fan’s thirst for athletic entertainment, nothing satisfies it quite like a live game.

“It sucks, but I’ve had to accept the fact we won’t have sports until fall,” said freshman Rob Cochrane.

Being away from school and friends is one thing, but not having sports to fill time is even harder for some.

Now, fans await the day when live sports are back. No one knows the answers on when or if the NBA playoffs will happen and if the MLB will even have a season. Dr. Anthony Fauci said he could see sports returning in the coming months, but without fans in attendance.

Athletic administration, the people holding sports together, have seen their lives shifted quickly in a matter of weeks as well.

Taylor Athletics is no stranger to this.

“It has changed everything so much,” said Athletic Director Kyle Gould. “We went from a busy time for all our sports to shutting things down in a few days.”

All sides of sports have been impacted by this. If sports was a part of someone’s life, that part may be gone for now. Athletes can’t be around their teams. Coaches have to find new and creative ways to stay in contact with their teams. Sports media is writing and focusing on new stories and ideas. People are starting to wonder how long this will last. Others are asking if sports will ever be the same.

Sports is something that holds people together. Now, the people may have to return the favor.

“I choose to be an optimist,” Gould said. “I try to have the perspective that everyone in America is dealing with the same thing in different ways. It’s important for all of us to do the best we can in the situation we’re in and believe all things work together for good.” 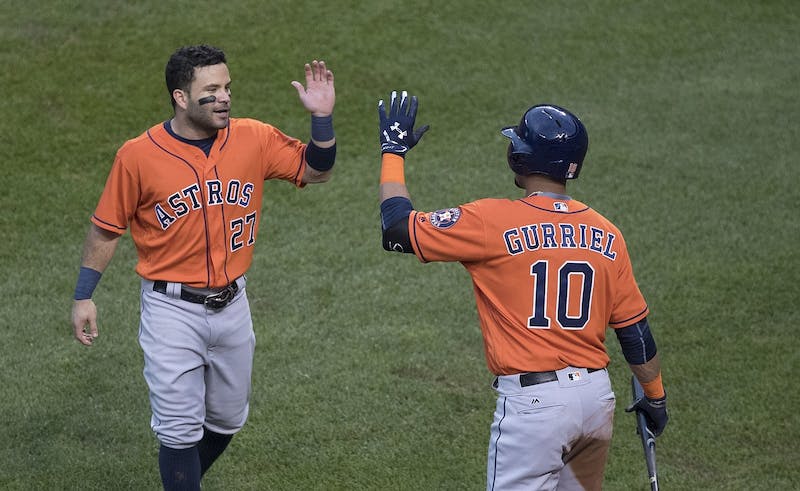 The Astros just made things worse