WTUR is committed to embracing their mission as boldly in real life as it is displayed across their website: “We strive to provide a professional and positive voice for Taylor University, integrating Christian faith and culture.”

Co-managers senior Christina Russell and junior Mimi Yoder look forward to leading this year’s team as they minister to the Taylor community through broadcast radio.

Russell, a film major, is entering her fourth year at WTUR, Taylor’s online radio station. Previously WTUR’s video production manager, Russell is eager to dive into her new role as station manager. She directs the six staff members and enjoys the creative control that this new role offers.

Alongside Russell is Mimi Yoder, a fellow film student. This is her second full year as assistant station manager. Yoder oversees WTUR’s show hosts and helps plan the group’s events.

While largely student-led, WTUR is supported by the leadership of Faculty Advisor Kathy Bruner.

When Bruner was first connected with WTUR in 2005, listeners could tune in at 89.7 FM. In more recent years, leadership has found it more effective to shift to online platforms.

“These days, some students record their live shows and upload them as podcasts,” Bruner said. “So while the ways to listen have changed over the years, WTUR has been a great outlet for creative students from all majors for many years.”

Russell and Yoder share a vision for this year.

In the past, the majority of WTUR’s audience has consisted of faculty members listening to chapel broadcasts. This year, the leaders hope to expand their reach, engage students from every corner of campus and inspire students to listen to their peers’ shows.

“This semester, we’re really focusing on broadening the number of students and really getting ourselves out there a little bit more so that we have more students listening as well,” Yoder said.

This year, there are 24 shows run by WTUR contributors. Hosts often invite guests to offer their insight on various topics, and students can even call in to shows when prompted.

WTUR is proud to promote music produced by Taylor students, and they encourage students to contribute in this way.

Russell and Yoder believe WTUR is fueled by the diversity of the students on Taylor’s campus.

Considering their diverse audience, Russell is leaning into the idea of radio as a unifying mode of communication.

“On Spotify, we all have our own playlists; there’s nothing really connecting us,” Russell said. “So I think listening to the radio can be a way to unify everyone. And it’s like, ‘Oh, did you hear that song on WTUR?’ because we all listened to the same song.”

Russell and Yoder draw energy from the uniqueness of their staff. Though a typical week of production looks different for each staff member, the managers work to blend their team’s varying skill sets for the show’s greater good.

She enjoys working closely with the hosts through the production process as well as advertising WTUR’s programs to classes of film students who might be interested in participating.

“They’re a really fun bunch and it’s been really great getting to know them,” Yoder said. “It’s really cool to, like, be able to work in this space because I wouldn’t have ever thought about doing this before, but here I am. It’s one of the best parts of being at Taylor, I think, for me.”

“I am really trying to look at the big picture,” she said.

The WTUR team members set aside designated time each week — what they often refer to as “power hours” — to record audio commercials, write scripts, brainstorm show topics and prepare for events.

Whether discussing music, movies, books or history, Russell and Yoder trust that their team will think critically as they engage with culture, honor and uphold Taylor’s values and ultimately reflect the heart of their Creator.

Despite the tendency for young adults to believe that social media gives them everything they need to know, the novelty of radio is not lost on the WTUR staff.

“Being able to listen to the ideas and passions of fellow Taylor students is a super cool opportunity to connect with people that you’re on campus with,” Russell said.

Russell and Yoder seek to share their passion for radio programming with their peers.

“Radio is not dead,” Yoder said.

The two believe that the best way for the broader Taylor community to participate in the work that WTUR is doing is simple: to listen.

WTUR can be found at wturonline.com and on the RadioFX app. 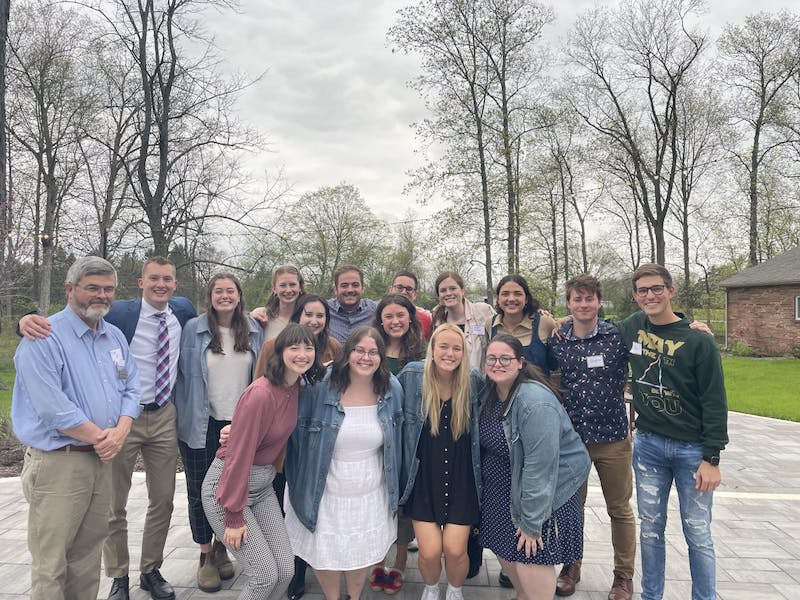