The Trojans will look to build off of last year’s successful, but — in the end — disappointing season. The season featured highlights such as a 17-game winning streak and the team was ranked in the top 25. Unfortunately, in the Crossroads League tournament, the Trojans would fall short and miss the NAIA national tournament.

Kansas Wesleyan was the first challenge of the season. The bats were hot in the first inning for Taylor with three runs in the top half of the first. Kansas Wesleyan bounced back in the bottom half, scoring two, both from errors.

The second inning saw the Trojans score another run, going up 4-2. Two more runs in the eighth inning made the Trojans win 6-2 over Kansas Wesleyan. Senior Luke Shively and freshman Jared Crandall limited Kansas Wesleyan to one hit and 16 strikeouts combined in the game.

“It is a really good start to the year, showing what we can do and what the rest of the year can look like if we have our best stuff,” Shively said.

On the offensive side, senior Nick Rusche, freshman Kaleb Kolpien, junior TJ Bass and sophomore Camden Knepp shined, all having two hits each.

The bats stayed hot the next day against San Diego Christian College.

Again, the Trojans started doing damage in the first inning, scoring four runs in the bottom half. San Diego Christian stayed in the game, closing the deficit to 4-3 heading into the bottom half of the fourth inning where the Trojan offense simply exploded for nine runs, making the lead 10 runs, 13-3.

Another explosive inning in the sixth saw seven more runs for the Trojans, making it 20-7. San Diego Christian’s rally was short lived with one run in the top of the seventh and the game finished in seven innings with 20-8 being the final score.

Bass once again had an incredible game with four hits and two RBIs. Junior Jacob Morris and Kolpien had three hits. In a game where offense was king, senior starting pitcher Drake Gongwer had seven strikeouts in 3.2 innings of pitching. Sophomore Jack Ross claimed his first pitching win of his collegiate career.

The hot start came to an end for the Trojans the next day against Arizona Christian. In the top of the sixth, Rusche gave the Trojans a 2-1 with a two-run RBI single. However, Arizona Christian would score six runs in the bottom half of the inning to take a 7-2 lead. Kolpien continued a strong start to the season with a two-run single in the top of the seventh to make it a 7-5 ballgame, but that was where the scoring stopped. Senior Noah Huseman put in a strong five innings on the mound with five strikeouts as well.

Taylor’s last day in Arizona didn’t bring a win against The Master’s University either. Once again the Trojan offense started strong. in the first six innings for the Trojans as they scored in every inning except the fourth. Heading into the bottom of the sixth, Taylor led the game 8-5. A five run sixth inning for The Master’s University saw them take a 10-8 lead and they would not look back taking the win.

“We scored enough runs to win both games, had some good outings on the mound, just mixed in the middle of two bad innings,” Head Coach Kyle Gould said of the losses.

Offensively, Bass, Rusche and Kolpien all shined once again, each having two hits.

The outlook for the team looks bright despite the 2-2 start. The team returns five batters that hit above .250 batting average last season, those hitters being Bass, Rusche, Knepp, senior Conner Crawford and junior Ben Kalbaugh. On the pitching side, Huseman and Shively both return, having been instrumental to Taylor’s pitching success last year, as opponents only hit a .219 batting average against the Trojans last season.

“One thing that will make or break us is our consistency,” Rusche said. “That is something we have been working on a lot.”

There will be tough competition once again this year in the Crossroads League. Gould thinks that Huntington, Mount Vernon Nazarene and Indiana Wesleyan will be the teams Taylor needs to beat to achieve their goal of winning the conference. 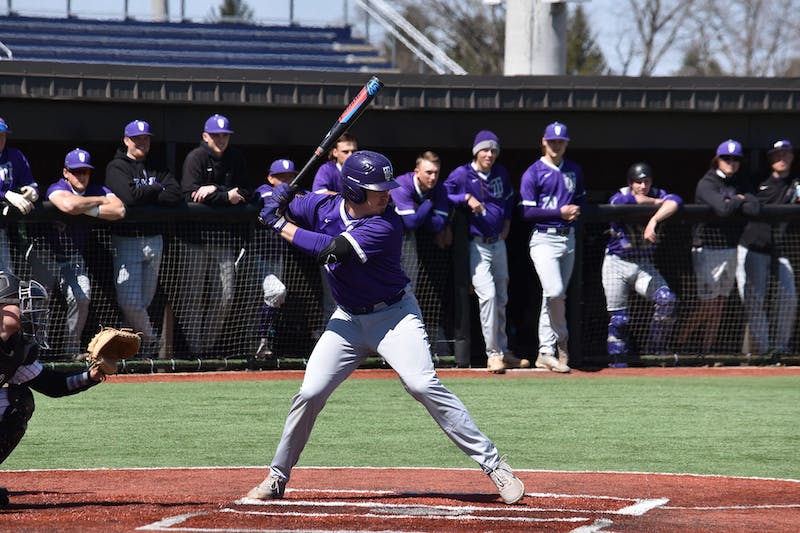