The women’s team ran to a 52-point victory, while the men’s team took fourth place after finishing a mere three points behind second.

Senior Sarah Harden led the women’s team and finished first-place overall in the process of breaking her own program record with a time of 17:42.6.

“I’ve been having a lot of good workouts,” Harden said. “I had the confidence and conviction on Friday, and had my goals and just went for them.”

The No. 6 ranked women’s team improved their record to 30-0 on the season, having won both of their invites.

Harden was only the beginning though, as the other four scoring runners for Taylor finished within the top-15 giving them an impressive final score of 39 points.

“We have two front runners, and then a very strong pack,” Head Coach Quinn White said of his runners on the women’s team. “The pack is continuing to progress and as they move forward they put us in a really good situation to shoot for the podium.”

Senior Livy Schroder took third-place overall and finished second for the Trojans. Behind her, and rounding out the top-five for the Purple and Gold was freshman Mollie Gamble, junior Giovanna Domene and sophomore Brooke Studinicki.

The women’s team finished No. 6 at the NAIA National Championships last season and are hoping to finish even better this season, despite Nationals being moved to the spring.

“As a program, boys and girls combined, we’re focusing on the word thankful,” Harden said. “And then we definitely have more performance-goals for both programs. Right now we’re just focusing on conference. It’ll be interesting to see how this season goes.”

On the men’s side, they were missing a few of their top runners but still managed to be in the hunt for a top-three finish.

Junior Derek Van Prooyen took fourth-place overall and paced the Trojans with a time of 25:39.9. Junior Alex Helmuth was close behind with a finishing time of 25:46.7. Rounding out the top-five was senior Luke Rovenstine, freshman Quinn Rudy and senior Sam Hardy.

“Even though we weren’t fully healthy, we still managed to get in range of finishing second,” White said. “We want to make sure that no matter what we’re given health-wise, We still need to be competitive, and we were only three points off of second.”

Despite the fourth-place finish for the No. 2 ranked team in the NAIA, Helmuth stressed the importance of the “jarheads” being at their best late in the season and using these invitationals to gear up.

Helmuth, who finished sixth, is off to an impressive start this season. The junior broke into Taylor’s top-five in four races last season and did not net a top-10 at a race in his sophomore year. This year, he’s established himself as one of the Trojans’ top runners with two top-10 finishes overall and a 2nd place finish at the Indiana Wesleyan Twilight Invitational.

He attributed part of his success this season to his summer, where he lived on campus and roomed with Rovenstine.

“I think hanging out together was one of the biggest factors for us,” Helmuth said. “We had that accountability, we were able to push each other.”

With two more invitationals before the Crossroads League Championships, Taylor is hoping to gear up and put themselves in a position to win their conference and get to nationals in April.

While they recognize the challenges of a spring national championship, Helmuth, Harden and White all mentioned achieving a program-wide goal of finishing on the combined-team podium this spring. However, they stay focused on the present and remain grateful for each opportunity to compete.

“We have all recognized just how thankful we are to be back,” Helmuth said. “For most of us, the last time we were running together was the beginning of March. Just being back and taking full advantage of running together and working towards a common goal is a huge part of this year.” 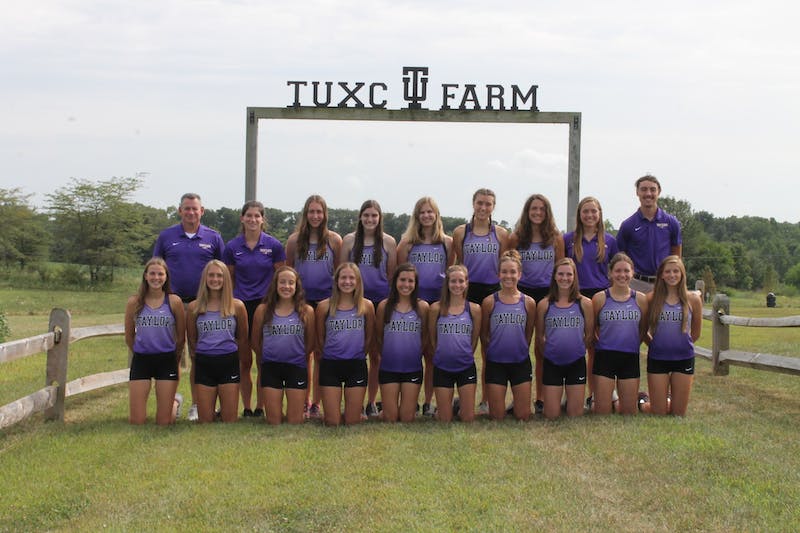