The platforms of candidates Biden and Trump

In the weeks preceding the presidential election, the U.S. political climate is fiercely divided and debates have taken personal issues into the public eye.

With all of this arguing, it can be difficult to understand what each candidate's platforms are.

Every election is characterized by key concerns. According to Jakob Miller, assistant professor of political science, COVID-19, the American economy and police reform matter greatly in this election.

Both candidates have vastly different approaches to each of these topics.

COVID-19 has steep political implications. Pew Research Center breaks down the divide that the pandemic has created, making COVID-19 a core issue in this election.

“These differences extend to opinions about whether a new stimulus package will be needed to address the economic fallout from the coronavirus,” Pew Research Center said. “Republicans are now much less likely to say an additional stimulus package is necessary than they were in early April, while Democrats continue to overwhelmingly say more economic assistance is needed.”

On March 27, 2020 the first COVID-19 relief package was passed by the Senate and signed into law. The package was titled the Coronavirus Aid, Relief and Economic Security (CARES) Act. This package consisted of $2 trillion to be allocated to people across America.

Seven months have passed since this package was signed into law. Americans are struggling financially, raising questions about another package in the future.

As of Oct. 15, Trump called for negotiations about the next stimulus package to stop until the election. As the landscape shifted, Trump tweeted out a message regarding the package.

"If I am sent a Stand-Alone Bill for Stimulus Checks ($1,200), they will go out to our great people IMMEDIATELY,” He wrote. “I am ready to sign right now. Are you listening, Nancy?"

Biden has stayed relatively quiet in regards to the current stimulus proposition. But, according to JoeBiden.com, if the proposed stimulus package is passed, he plans to forgive $10,000 per person in student loans, and increase Social Security checks by $200 per month.

Aside from the financial concerns COVID-19 has spurred, a federal mask mandate and “stay-at-home” orders are in question.

According to isidewith.com, Trump disagrees with a federal mask mandate while Biden agrees.

When asked whether the government should enforce a “stay-at-home” order to combat the coronavirus, Trump said, “At some point, we have to open our country. And people are going to be safe. We’ve learned a lot.”

When asked the same question, Biden said, “I would shut it down if necessary; I would listen to the scientists.”

Because of the pandemic, the American economy has taken a steep decline. According to BBC News, “The US economy has been hit by the highest contraction ever recorded and the highest unemployment rate in more than 80 years.” In April of 2020, 14.7%of Americans were unemployed due to the pandemic.

Both candidates have a response to this reality.

Prior to the pandemic, the Trump administration prided itself on having the lowest unemployment rate in half a century — 3.5%. As the unemployment rate increased, so did the national debt. To bounce back economically, Trump plans to enact “supply-side economics,” according to The Balance.

“Supply-side economics is the theory that says increased production drives economic growth. The factors of production are capital, labor, entrepreneurship, and land,” Kimberly Amadeo from The Balance said.

To enact this economic approach, Trump advocates for all businesses to re-open, allowing unemployment to decrease.

Biden has a different approach. To allow people to get back to work and revive the economy, Biden believes guaranteed COVID-19 testing is necessary.

JoeBiden.com says, “If we are going to send Americans back to work without having beaten COVID-19 as a nation, workers should know if they or their co-workers are infected.”

Along with this, Biden is calling for guaranteed paid leave for all who get sick.

Additionally, a national racial reckoning transpired. Police reform is the main focus of this reckoning, making it a topic in the upcoming election.

Throughout his presidency, Trump has advocated a “law and order” policy. In reference to recent events, Trump said, “We have to bring back law and order in this country and I think the police are phenomenal people.”

To enforce order, Trump signed an executive order calling for better training for police officers. The order calls for the creation of a database to track police misconduct.

In response to police reform, the Biden campaign will fund initiatives to partner mental health experts with police. These service providers will train police to better de-escalate interactions with communities.

In the aftermath of George Floyd’s death, questions on the practice of chokeholds have arisen.

Because of this, in mid-June, Trump announced a nationwide ban on chokeholds unless an officer’s life is at risk.

Biden called for the immediate banning of chokeholds in all cases. He also said, “We must stop transferring weapons of war (guns) to police forces.”

Every election is distinguished by key issues. Amid 2020, the key concerns are the COVID-19 pandemic, the American economy and police reform.

To further learn about each candidate's platforms visit isidewith.com and ballotpedia.org. 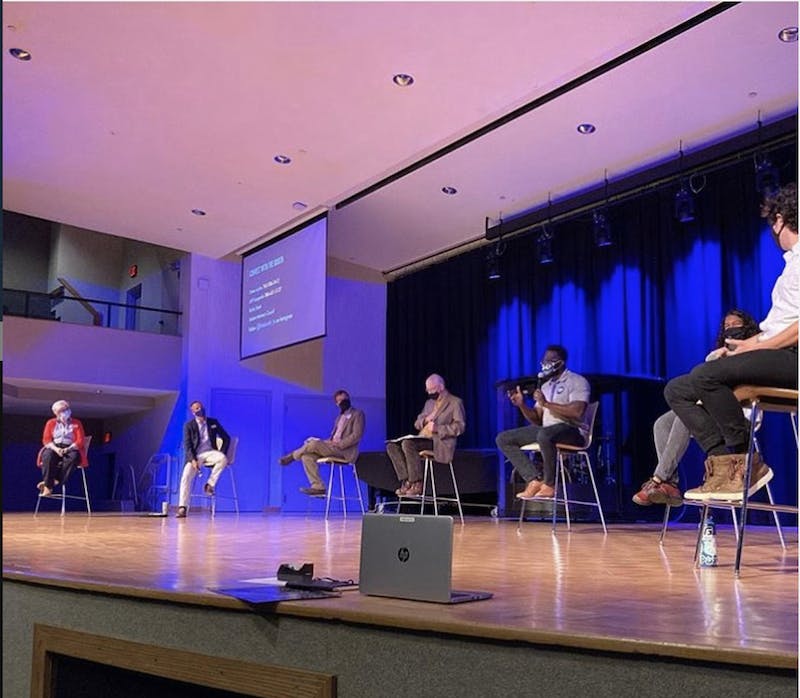