Students will not be traveling internationally or domestically this J-term

All domestic and international trips have been cancelled for January 2021.

“As we look at the interterm, it seems pretty clear, the evidence is saying you really aren't going to be able to plan,” Provost Michael Hammond said. “Because you have to plan now, you can’t just decide in December that you’re going to travel for entertainment.”

What the announcement on Aug. 11 didn’t detail was what would be happening over J-term on campus. In-person classes are still on the schedule, but the administration will be reviewing the situation as it gets closer to make sure that conditions are actually safe.

If in-person learning is not cancelled this J-term, then it will be a unique time on campus. More classes will be offered to make up for the larger number of students on campus who cannot be abroad.

“May-term” is a potential option, but that involves a lot of other details: whether travel is allowed, and if the particular trips work well. In many situations it works better to travel in January, and is cheaper to travel in January than it is in the summer. Otherwise, January 2022 is the next most likely option.

There is a good chance that travel will be too dangerous because of the virus, but administration is still holding off on making the call for study abroad during the spring semester.

“We’re still working on those plans as we get closer to February,” Hammond said.

While some freshmen might not have even known about J-term trips yet, others are disappointed to miss out on them. Jayden Wilhelm was excited for his trip to Thailand— this year’s destination for the traditional freshmen Honors international trip.

Traditionally, the freshmen honors students take a class to learn about their trip’s destination.  This year, they won’t be going.

However, this should only be a delay. All Honors Students are given a scholarship for a J-term trip and the school will do their best to give the students the experience when it is safe.

“We’ll make sure it happens, as soon as we can,” Jeff Cramer, director of the Honors Guild, said.

When and where have not exactly been decided on yet. Sticking with Thailand is the hope, but with as much uncertainty as the future holds, they might have to settle for a different destination.

Despite the hassle that this year presents, students and staff still are firm supporters of J-term trips. Cramer said that one of the points of the honors trip is to encourage the freshmen to have more international experiences.

J-term is not just a time to be tourists, but to learn and grow spiritually. Students arrive to campus a few days before departure to take classes and learn about the country and its culture.

Trips students take include Lighthouse trips to serve and grow in areas like Nepal, Central Asia, or Greece, and more learning oriented expeditions to places like London or Manilla.

As fun and happy as several weeks out of the country may seem, some of them are serious and eye-opening. Senior Quinn Anderson went to Nepal this past January and learned a lot about both the problems in the country and the Christians as they worked with a team fighting human trafficking.

“It just opened my eyes to (a lot of) perspectives that I’m still processing, eight months out,” said Anderson.

The group got to do day camps with local kids, and hear the testimony of a woman rescued from an abusive relationship.

Anderson said that he was humbled by teaching the kids, and grew a lot during the short time in Nepal.

“What the Lord is doing over there is phenomenal,” said senior Caleb Erikson who also went to Nepal. The students got to see God’s powerful presence in a country vastly Buddhist and Muslim.

It is more than just a “hands on” type class, but, as Anderson said, it is a life changing experience.

Even though this year’s trips were cancelled, the university will do their best to make sure other students have the experience in future years.

“There’s no other substitute for a J-term trip to another country,” Anderson said. “There’s just not.” 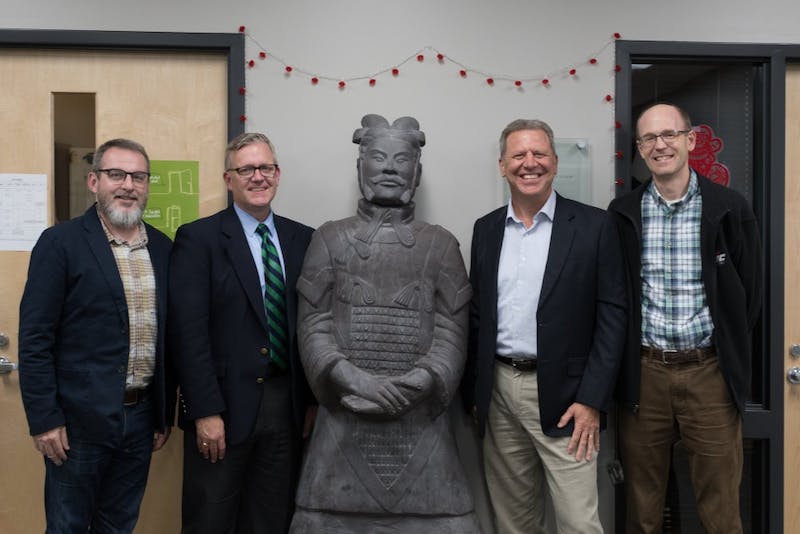