Wherever he has been, Taylor senior Caleb Anthony has found success on and off the track.

Hailing from Centerville, Ohio, Anthony earned four varsity letters as a member of the Centerville High School Elks track team. He was an Ohio All-State selection three times, picking up the Most Valuable Sprinter award as an Elk.

His efforts off the track didn’t go unnoticed either, as he was a member of the National Honor Society and National French Honor Society in his senior year.

During his college search, a friend of his recommended Taylor University, a little Christian college in Upland, Ind. with cornfields on virtually every side.

Upon visiting Taylor for the first time, Anthony wasn’t quite sold. “I visited and absolutely hated it,” he said about his first encounter with his future school, “but somehow God guided my path to Taylor, away from big schools that would have offered me a lot of track scholarship.”

Once he arrived at Taylor, Anthony was placed on the second floor of Samuel Morris Hall. A four-year resident of Sammy II, his affinity for the floor is plain to see: “I fell in love with the SIIS community.” The floor helped to ease his worries and doubts about the school just in time for track season.

A successful freshman year was simply foreshadowing an even better sophomore season.

Anthony was named an NAIA All-American and the Crossroads League champion in the 60-meter hurdles during the indoor season and earned CoSIDA Google Cloud Academic All-District II honors.

This national title was the source of plenty of joy and excitement, for both the team and the coaches.

“We all thought that he was an outstanding 110m hurdler,” said coach Quinn White, “but we were overjoyed when he won the 400m hurdle title.”

That outstanding sophomore season was enough to earn TU Male Athlete of the Year, along with another CoSIDA Google Cloud Academic All-District II designation.

Anthony’s junior season brought more of the same; he was Crossroads League Champion in the 110 and 400-meter hurdles as well as the 4x400-meter relay. He was named a USTFCCCA Scholar-Athlete and a part of the CoSIDA Google Cloud Academic All-District team.

Although his senior season was cut short, Anthony’s coaches will remember him fondly.

“He has modeled perseverance. Caleb worked with three different coaches over his career at Taylor. It is hard to have one transition let alone three,” White said.

After such a decorated and hectic time at Taylor, Anthony remembers a few key takeaways.

“My team has meant the world to me, as I know for a fact that I would not enjoy track if I did not have the team I did. They have been here for me and were just great people to be around every step of the way.” Anthony said.

His parting words of advice follow a similar message; cherish your team and work on the little things.

“Never try to become great on your own,” he said.

Anthony will be graduating with a degree in computer science and systems. His future plans are to work for the U.S. Air Force, with the goal of being moved to the U.S. Space Force. He wants to one day run a business with his brother as well.

After four years in Taylor’s track and field program, Anthony has certainly left his mark. He holds the school record in the 60-meter hurdles and was a part of the 2018 record-breaking 400-meter relay team.

A national champion and record holder here at Taylor, who knows what he will accomplish in the years to come. 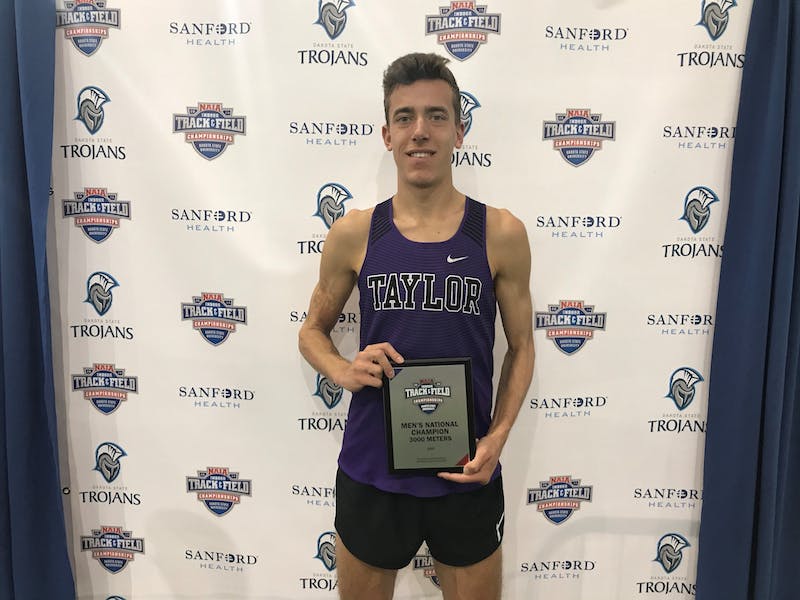