Saturday marked what could be the beginning of a winning streak for Taylor men’s basketball with their 94-79 victory against Mount Vernon Nazarene University.

Senior Mason Degenkolb started off with a 3-pointer at 19:20 in the first half resulting in a 3-0 score.

The Cougars followed up with two free throws.

At 19:01, senior Ryan Robinson scored three more points for the Trojans; the score was 6-2.

Sophomore Jason Hubbard then assisted sophomore CJ Penha on a 3-pointer. The score was 9-4.

“It was a really fast paced game, a lot of people were hitting threes, we were just playing for each other,” Robinson said. “It was really good to see us sharing the ball and playing as a team.”

At the 17:30 mark the Cougars finally caught up with the Trojans with a score of 9-9. This would be the only tie in both halves.

For the rest of the first half, the Cougars struggled, but to no avail. They simply couldn’t catch up.

The Trojans maintained a solid lead, ending the first half with a 51-34 score.

“We just kept getting defensive stops, we were able to convert on offense at a pretty good rate, knocking down our shots,”Degenkolb said.

According to Degenkolb, this is how they maintained this lead.

Within less than a minute into the second half, Degenkolb and Penha popped off with five more points for the Trojans. The scoreboard read 56-36.

The Cougars then had a chance to make five points of their own. Jevon Knox scored all five as they cut the lead to 15 with 17:46 remaining

As the game began to wind down, the Trojans kept hitting more shots up until the last few moments. At 1:33, Robinson scored 3 points and then at 0:56, Degenkolb scored two more points. The Trojans won.

“It was a really important game for us in the conference as far standings are concerned,” Degenkolb said.

In addition to the team’s win, an additional award was handed out a couple of days later. The following Monday, the Crossroads League named Penha Player of the Week. Penha scored 25 points during last Saturday’s game against Mount Vernon.

On Tuesday, the Trojans secured a spot in the Crossroads League Tournament with a 6th place ranking after a historic 75-72 victory against Huntington University.

After being defeated the last four times, the Trojans were finally able to overcome the Foresters.

“We’ve come a long way, our conference is so challenging, we’re proud of what our guys have accomplished, we hope to get better,” said Head Coach Josh Andrews.

After their victory, Andrews advised them to take a breather and get ready for some upcoming practices before they played Indiana Wesleyan University on Saturday. 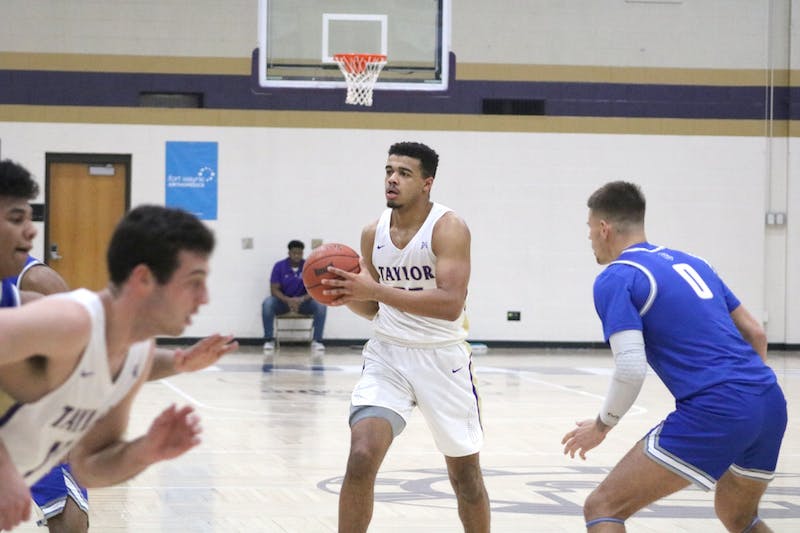