Cathy Harner is a professor of social work at Taylor and finds passion in her field in her passion for Christ.

What was originally a goal to teach English abroad morphed into a career in social work.

Cathy Harner, professor of social work and director of social work education, said she stumbled upon the profession because her dream to teach English could not be carried out without the addition of another major. Social work was the only major that fit the criteria.

Even so, Harner found herself making a difference in about eight lives at a time and realized social work was where God called her to be. She is thankful that God prepared her for the opportunity by teaching her the lesson the same way he has taught her everything else: by opening a door and shoving her through it.

“I didn’t relate as well to my clients as I got older, so I decided to pass the mantle, which involves educating the younger generation,” Harner said. “It was an amazing experience, how God prepared me to do so many of the things I’ve been given the opportunity to do through Taylor.”

According to Harner, one of the most rewarding aspects of the job is found in the students. She said they challenge her to think more deeply and give her the opportunity to be involved in their lives. For Harner, it is always rewarding to watch the light bulbs go on in their heads.

Harner — who is retiring at the end of this school year — believes these are the pieces of Taylor that makes leaving so bittersweet. As the days become longer and harder, she knows it is time to retire, but still finds joy in the blessings.

“I look back on the past 28 years at Taylor and feel like I’ve been rewarded,” Harner said. “I think I’ve served Taylor well, and I think they have served me well.”

Through Taylor, Harner said she has been given plenty of opportunities to travel internationally. She is also proud to have been in her position when Taylor’s social work department was noted as No. 1 in Indiana and No. 6 in the country through SocialWorkDegree.org.

Today, she says she loves the idea of being a social worker over being a faculty member.

Harner looks back at her life experiences and knows that God used them in the long run, even when she believed nothing positive could come out of them. She said the areas that don’t always fit the typical Christian profile have been put at her disposal and allowed her to reach others in ways she couldn’t have even imagined.

“I usually ask God, ‘Why choose me?’” Harner said. “Yet, I wouldn’t change it for anything.”

She found this calling to be true while ministering to individuals at the Damien Center in Indianapolis, where she led an HIV/AIDS support group. When asked by the attendees why she came from Taylor to minister to them when they knew she didn’t agree with their lifestyles, Harner said she wanted to be God’s representative of the church many don’t see.

She believes the church can often fall short in its areas of ministry. According to Harner, Christians are called to love others with the love Christ has shown on them.

Her position in social work has opened her eyes to the ways God deals with peoples’ issues on his own and how people of faith are simply called to love rather than fix others themselves.

“I am so frustrated at times when we try to insulate ourselves from the world,” Harner said. “My heart is broken when I think about how we’re going to pay for that action. For the people we’ve pushed out of the kingdom rather than bring in.”

For Harner, if she can’t love with the love Christ has shown her, she has no business reaching out to other people. This has been a recurring theme for her, as she said any kind of work in human services will bring about circumstances that challenge one’s faith.

Harner encountered many of these challenging instances during her time in social work. She recalls once when an individual from the HIV/AIDS group she led was placed in intensive care, and when she prayed for the spirit to come inside of him, he sat up and began talking.

“I no sooner said ‘Amen’ when he looks up and said, ‘That man you were praying to, he did it,’” Harner said. “I played it off as being delirious, but six months later received a call from people in the support group saying he was healthy.”

Harner said this proves prayer can make a difference. The hospital chaplain had told her many people sell God short because they don’t think he’s big enough to deal with their issues, and that saying stuck with her.

She encountered many other experiences that caused her to doubt, such as challenges with a coworker with different lifestyle choices. Yet Harner still stands firm to the belief that people shouldn’t blame God for what Christians have done to them.

She thinks once a personal relationship with Christ is established, that’s all that needs to happen.

“Don’t be afraid to be Christ to people; you may be the only Christ that some people see,” Harner said. “Don’t be afraid to love fiercely. We are fighting for peoples’ souls, and we sure are busy pointing out sins we don’t commit in other people.” 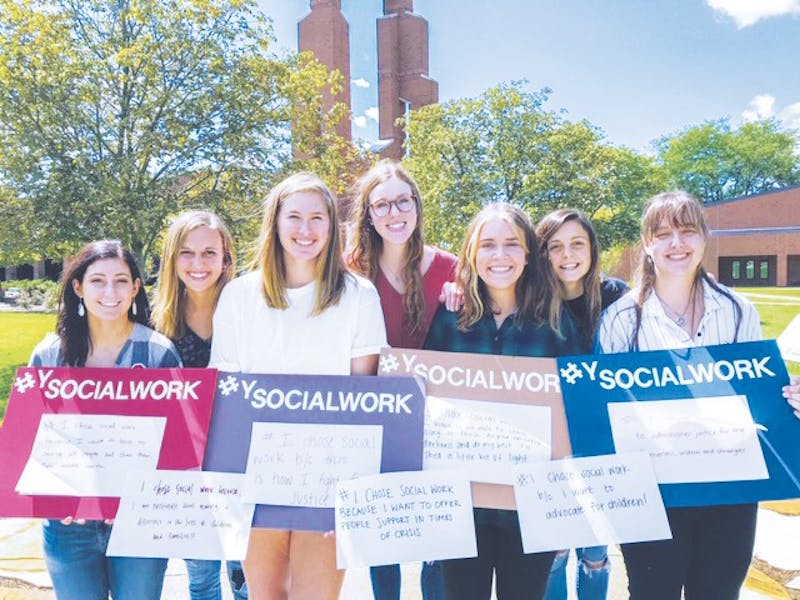 Social work is No. 1