GREYSTONES, IRELAND – First impressions are weird. That was spinning around in my head as I took in my surroundings. Ireland, where I would spend my semester abroad. From what I saw, it was a place full of country villages that could be straight from an Agatha Christie novel except for the television disks sticking out from the black shingled roofs.

I remember my first impression of St. Louis when I visited over Easter break. I was pretty disappointed by how small The Gateway Arch was. I told this to Jeff Cramer, associate professor of computer science and engineering, when he came with us for the first part of the trip to set up the foundations course for the freshmen.

“Really?” Cramer said. “I just went to St. Louis and I must have said a thousand times, ‘Man, that is a big arch.”

The next day we went to Dublin, a deeply historical city centered around a stainless steel monument called the Spire that looks ugly and modern and a lot like a sewing needle.

Cramer pointed up at it.

“Do you think that is big?” Cramer said.

I responded that I guess it did. He turned his phone around. On it were side-by-side measurements for both the Arch and the Spire.

“The Arch is bigger.” Cramer said.

I could tell by the self satisfied gleam in his eyes that told me he was not going to drop this. I could also tell by the comment he left on my Instagram post with the Arch. Needless to say, Cramer was dearly missed when he left.

In contrast to Dublin, Greystones, where we spent most of our time, was just a sleepy little beach town full of young families, old people and lots and lots of dogs. Pretty much the only thing the town is famous for is a vegan place called the Happy Pear where people gulp down ghee by the bucket load and jump into the Irish Sea at sunrise. Naturally, I have done both. For some, jumping in the frigid water is life-altering. To me, it felt like swim practice, my summer penance for ten years.

Even conversations with locals were different than expected. I was told that Ireland was the land of a thousand welcomes or something like that (it is hard to tell with the accent). But every time I talk to an Irish person, they are so soft spoken that I often think they are saying things in Gaelic when they are really just mumbling.

For example, my roommate Chauncea Deno and I were walking along the shore to get a late night pizza. As we were walking, I saw a golden lab and was compelled to pet him. I asked the owner for his dog’s name. He mumbled something inaudible. Now I was faced with a real conundrum, do I guess and risk being wrong or fake my way out of it?

I am a daredevil. I went for it.

“Brand...leis?” I thought it sounded like a sort of Celtic hero’s name. Certainly the kind of thing an Irish person would name their dog.

“Brandon.” He said, a little louder.

And so, what have I learned so far in Ireland? Perception is everything, and maybe my first impression is not always the right impression. Most of the time when I have talked to people from here, the conversation has been friendly and welcoming. Maybe jumping into cold water way too early in the morning was not my cup of tea but other people like it.

And maybe the Arch is a perfectly big monument. I am willing to admit that I am wrong. Are you happy now Cramer? 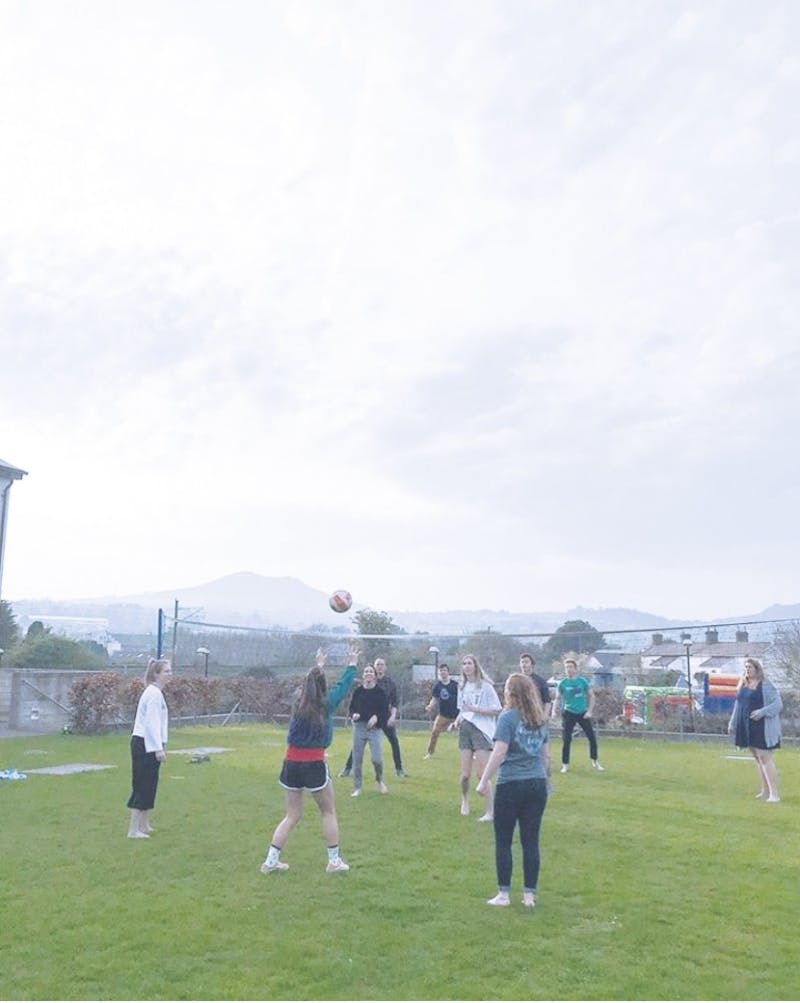