Year defined by successes and returns

By Jack Mulkey
Silent Night returned after a one-year hiatus.

For the ninth straight year, all of Taylor’s varsity athletic teams achieved a 3.0 GPA or higher. Taylor was one of five schools in the NAIA to have all of their teams be awarded NAIA Scholar-Teams.

13 of Taylor’s 18 teams had a GPA above 3.50. Men’s cross country, track, football and women’s soccer all posted the best team GPA in the NAIA. Women’s soccer had the highest GPA of all the teams at Taylor with a team GPA of 3.83, which placed them ninth among every team of every sport in the NAIA. 109 Taylor athletes were deemed NAIA Scholar-Athletes. To achieve this, one must be a junior and have a 3.50 or higher cumulative GPA.

If someone was to walk into Odle Arena right now, the sounds of drills and hammers and the smell of paint fumes would immediately catch their attention. This is because a $1.1 million renovation of the Old Well — the gym on the second floor of Odle Arena — is happening.

The newly-renovated weight room will house a training ground for all 18 of Taylor’s varsity sports teams. The renovation allows for more space for free weights and an open area to practice explosive movements related to the sport the athletes are in. Downstairs, the Odle Arena lobby is also going through a renovation with updated bathrooms. The athletic department is also going through a rebrand for this upcoming academic year. Lastly, Turner Stadium will be getting new turf in preparation for next year’s football and soccer seasons.

This year has seen five milestone victories for various teams and coaches. First, volleyball won their 1,300th game in program history, just the second program in NAIA history to achieve this. The win came on Oct. 15 with a sweep of Goshen College. Volleyball head coach Erin Luthy won her 100th game as head coach of the Trojans on Sept. 15, also a sweep of Goshen.

Softball head coach Erin Bellinger won her 100th game as head coach of the Trojans on April 1 with a shutout of Mount Vernon Nazarene University, winning 3-0.

The baseball team won their 1,500th game in program history on March 14 with a shutout of Huntington University, winning 5-0. Baseball head coach and Taylor Athletic Director Kyle Gould won his 600th career game with the Trojans defeating Grace College on April 30 in a wild 19-11 win.

Both Taylor cross country teams won the Crossroads League title this season. It is the first time both teams have won the league in the same year since 1996. Both teams beat out county rival Indiana Wesleyan University, the men’s team winning by 10 points and the women’s team dominating — winning by 50 points. The women’s team went on to finish fourth in the NAIA National Championships while the men’s team finished 11th. Men’s golf won their sixth straight Crossroads League title winning by 16 shots over Marian University.

After a disappointing cancellation in 2020 due to the COVID-19 pandemic, Silent Night returned this year. Taylor’s men’s basketball team won a nail biter over Lincoln Christian University in front of a sell-out crowd that included current Indiana Gov. Eric Holcomb. The win moved Taylor to 23-1 all time in the annual Silent Night game. Sophomore Kaden Fuhrmann led the team with 34 points and eight rebounds while senior Aaron Hahn also was crucial in the win with 20 points and seven rebounds. 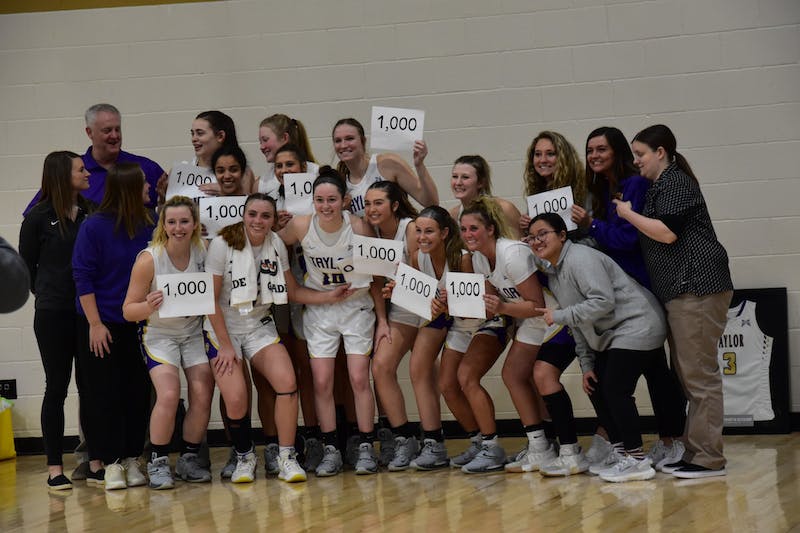