Sophomores Amelia Bostick and Marissa Muljat are the co-editors of the Features section for The Echo here at Taylor.

Both Muljat and Bostick got involved in The Echo their freshman year and became passionate about highlighting some of the individuals on campus who were doing new and exciting things.

The two started off as staff writers and didn’t know at the time how they would soon grow and develop into both of them becoming writers, designers and feature-section co-editors for The Echo.

By being involved in almost every aspect of The Echo, the two have been able to build a greater appreciation for journalism.

“I think journalism is a good way to share people’s stories and build community which is so important here at Taylor for sure,” Bostick said. “Through other people’s stories we are able to unify the student body to a greater extent.”

The features section is a platform that allows different types of people from all different backgrounds to be given a chance for their story to be told.

For Muljat, The Echo is a form of ministry.

“I feel like The Echo is a good way to serve people,” Muljat said. “It’s kind of cool to highlight specific people and get to know those people more, especially people you wouldn’t otherwise know or interact with.”

This is a way to love others effectively by truly getting out of your immediate circle to get to know your neighbors, she said.

At an institution of higher education where intentional community is so valued, the features section is an integral part of this ideal.

By taking the time to read someone else’s story you’re putting in the effort to better understand those around you.

“Every year there’s a whole new class of people who can be interviewed for features and there are always new people coming into different positions at Taylor,” Bostick said.

Because of this, there is always a new story to be shared or something new to be highlighted.

The features section isn’t only about a single person, but it brings to light events and activities that students believe are important.

One of Muljat and Bostick’s favorite feature interviews was with Dr. Mick Bates.

Through interviewing Bates, the two were able to form a deeper bond with a professor, experiencing the care that Taylor professors have for the students, which is exactly something that the features section tries to emphasize.

As an avid animal lover, Muljat recalled how exciting it was to combine both her passion for writing and animals into one.

“We interviewed Bates together,” Muljat said. “He breeds puppies and so when we were there, we got to play with them. It was so fun and he and his wife were so welcoming to us.”

By sharing highlights of different clubs or activities on or connected to campus, students can feel as though they are participating in and maybe even being exposed to things they might not have known about before.

The features section is able to shine a light on Taylor’s culture by displaying the values that different individuals hold within the community.

The two editors attempt to interview a wide array of people in order to show a multi-dimensional side of campus.

It’s important to share everyone’s story, not just a handful of people already known on campus. In order to build community, it’s important to make every person feel seen.

If you have a person in mind for a feature story or a cool story about yourself, Bostick and Muljat encourage you to email echo@taylor.edu so your voice can be heard.

Without you, the Features section would be nothing! 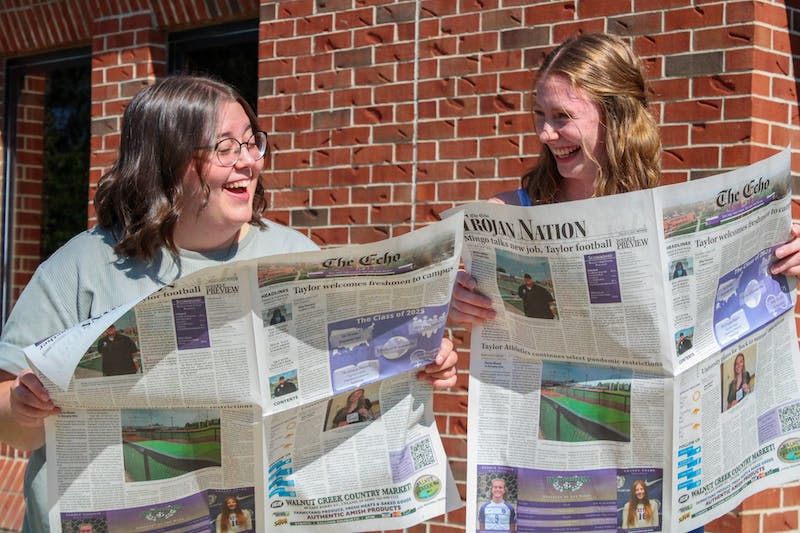