Former Dining Commons (DC) Service Manager Ben Eaks was at work in the DC when he spotted a student wearing Heelies.

Eaks owned a pair of the trendy wheeled shoes as a kid, and was excited to see them back in action. He made an off-hand comment to the student that he couldn’t roll from one end of the DC to the other.

The staff cleared a path for the student, who took a few steps forward and jumped, rolling along the DC floor. He spread his arms to signal his victory.

“It made my Tuesday so much better,” said Eaks.

Eaks, known for his smile and friendly service, enjoys the joyful moments of his job and loves to spread that joy to students.

“I try to be positive with everything I do. I don’t always succeed, but, you know, you got to try,” he said.

He started working at the DC in January 2020 and just recently left to pursue other opportunities. He described his role as the “front of house” for the DC. His duties included ensuring students’ food was cooked to the right temperature and presented well, among other responsibilities.

A career in food service wasn’t his goal, however.

“I always knew that I wanted to return to college,” he said. “I wanted to be a nurse, but I was unable to finish (my degree) because of (COVID-19).”

COVID-19 proved to be a big hurdle for both Eaks personally and in his job. Last year, Eaks and his staff were faced with a daunting task — the feeding of quarantined students.

Students in quarantine at Haakonsen Hall, the Dome or in their dorm room are delivered breakfast, lunch and dinner through the DC. In 2020, the DC and the catering team partnered up to prepare these meals. A group of eight students delivered the meals, but some days Eaks himself made deliveries.

“A couple people can’t do all of it,” he said referring to the large number of quarantine meal orders last year. “We’ve not been able to fulfill the needs in the timely manner that we’d like to.”

He and other members of his team must wait until the DC is empty to leave with students’ meals, which sometimes leads to the meals arriving late. Sacks of food are left at the Dome and the Haak for quarantined students in case situations like this occur.

COVID-19 cases have declined since last year, and Eaks is hopeful that quarantine meal delivery will be easier for his team in the future.

Eaks loves meeting students and appreciates the feedback they’ve given him.

“When I’m having a bad day they uplift me, and I just hope I can do the same for them,” he said.

He recalled a stressful night when he had 60 quarantine meals to deliver.

“A student just stopped me, and they were like, ‘listen, I know you’re running through a lot. Can I just take a moment to pray for you?’ I didn’t realize that I was (overwhelmed) until he stopped me for that second and he prayed for me,” Eaks said.

Showing appreciation for Eaks and other DC workers can be as simple as moving your chair back to where you found it. When students leave tables and chairs pushed together at dinner, DC workers must move them back at the end of the night. Sometimes one employee must move as many as 200 to 300 chairs.

This job has taught Eaks a lot about leadership in a different way than he experienced growing up.

“When I was in sports, I was always the team captain. Leadership like that is really easy because it’s leadership by example,” he said. “To manage a team you need to lead by example as well … everyone doesn’t have the same starting point, you have to meet everyone where they’re at and help them get to where they need to be.”

Eaks has had plenty of experience leading during large events like this year’s Homecoming and Family Weekend. While his team brought coolers for beverages and cold foods, keeping these items cold in the 80-degree heat was a challenge. They fed 2,000 people at Saturday’s tailgate, as well as 700 others at class reunions.

He is excited for some of the new menu items planned for this year, including the addition of milkshakes to Blue Flame Grill.

While he’s become part of the beloved DC team, Eaks resigned on Thursday, Oct. 14 to finish his associates degree at Ivy Tech Community College. He loves his team and his job at the DC, but he feels the time is right to return to school. Just as he served the Taylor community well, he hopes to serve others as a nurse.

Though his career at Taylor has been short, he loves Taylor’s community and is grateful for the people he’s met here.

“Thank you for the welcome from the students and the staff that everyone gave me. The hospitality is really amazing,” he said. 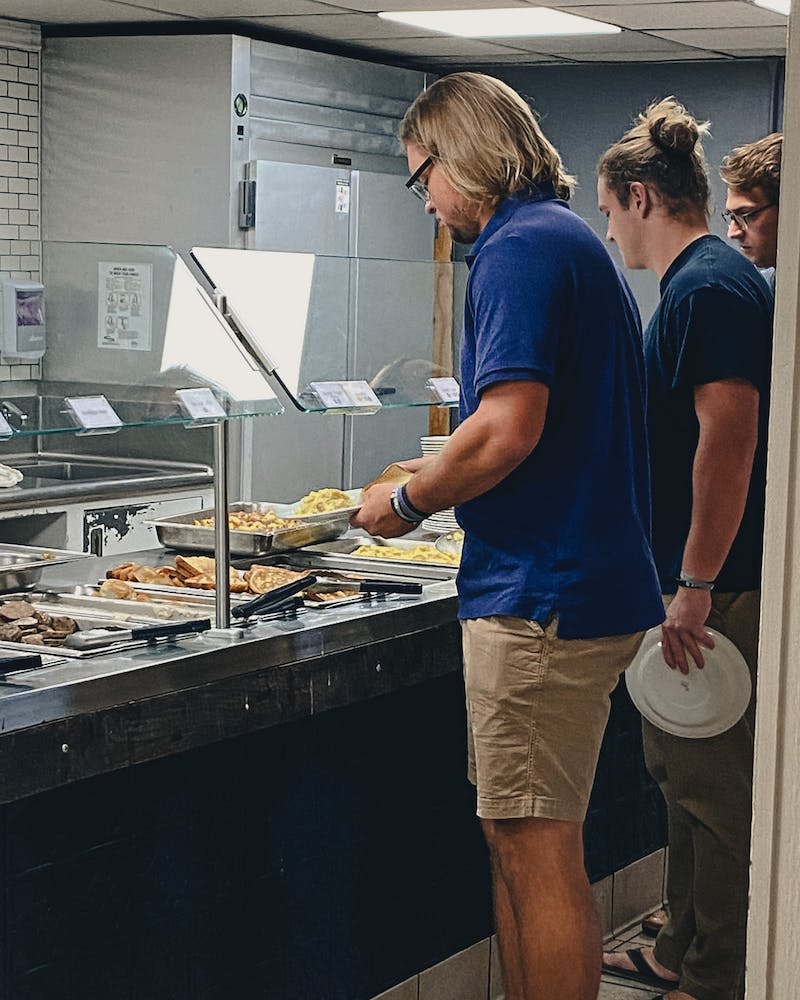