The Taylor volleyball team fell in 3 sets to Grace College in their season opener at Odle Arena last Saturday.

The Trojans kept things close in a back-and-forth first set, ultimately losing it 25-21. The following two sets were not as close as the first though.

Taylor went down early in the second set and found themselves in too deep a hole to rise out of. Grace won it 25-16, despite a late resurgence from the Trojans, who scored five consecutive points in a late comeback effort.

Finally, the third set initially appeared as though it would be similar to the first. Some early back-and-forth scoring eventually gave way to a 25-13 win for Grace and the first loss of the season for the Trojans.

Junior Ryan Czerniak looked back at the performance with frustration.

“We didn’t play Taylor volleyball.” Czerniak said. “We have talent and we know how to play; we just need to put it together.”

Despite a tough opening loss to a Crossroads League opponent, the Trojans found a way to be positive about the game.

Sophomore Kacy Bragg’s biggest takeaway from the game was that the team is now “more aware of both our weaknesses and strengths.” She goes on to say that this game was a poor demonstration of their team’s ability: “Our passing and defense wasn’t great. I know that we can do better.”

In addition to what is happening on the court, there are factors off of it that are already playing a significant role in how this season plays out.

Scheduling restrictions due to the COVID-19 pandemic have drastically changed the structure of the 2020-21 season. In the 2019-20 season, Taylor had 12 non-conference games before playing their first Crossroads opponent. This season, they jumped right into league play.

“It is hard to walk into your first match with a conference opponent and gel.” Luthy said. “We will continue to work and grow together as a unified team.”

This season, Taylor volleyball will play 18 matches in the Crossroads League and 3 non-conference competitions. Without any buffer before league play, it is important for the Trojans to start gelling as fast as possible.

Coach Luthy has challenged her team to meet several goals this season. National competition is the large goal, but she says it can only be achieved “through conquering our small daily goals of being unified, competitive and excellent every day in practice and in our upcoming conference matches.”

In response to their coach’s words, Taylor took down Huntington University at home in 5 sets to pick up their first league win of the season on September 8.

The Trojans were back in action this weekend in Odle against Indiana University Kokomo on Friday and Marian on Saturday. 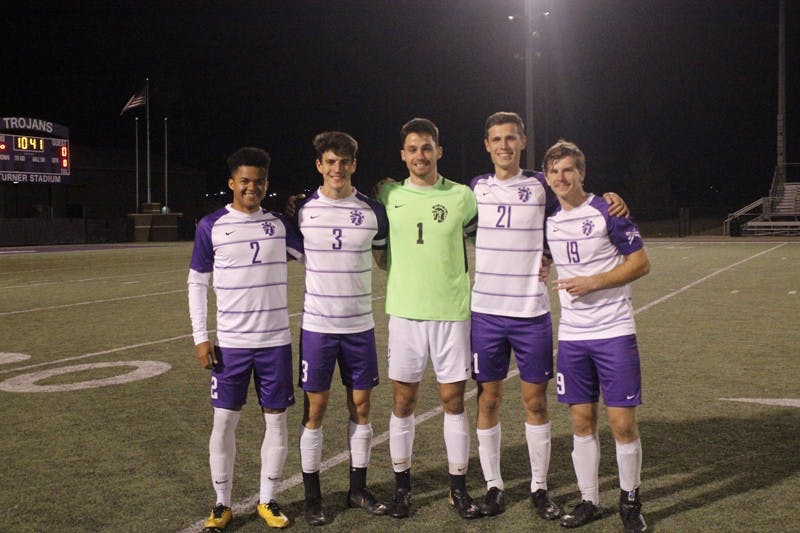