Gather up recycling and sort through the trash as Taylor participates in its second annual RecycleMania competition.

RecycleMania is a national competition among college campuses designed to promote waste reduction through recycling. The competition is an annual, eight week project that began Feb. 2 and concludes on Mar. 28.

This year marks the second year of Taylor’s participation.

Every campus that participates reports the amount of recycling and trash collected weekly to determine the percentage of waste that the school recycled.

National recognition is given to the winning school in the form of a press release and a trophy made out of recycled waste.

Students, faculty and staff of Taylor can get involved in multiple different ways during RecycleMania, in addition to recycling.

All of the events that are happening on campus are new as of this year and give numerous opportunities for people to get involved.

On Feb. 20, Taylor hosted a basketball game against Indiana Wesleyan where student volunteers collected recyclable items during the game.

Sophomore Sustainability Assistant (SA) for English Hall Hailey Lyon, said she remembers the first football game Taylor hosted against Indiana Wesleyan this fall. She said the biggest thing that stood out to her after the game was the amount of plastic water bottles that were thrown away that could have contributed to recycling.

On Monday Feb. 24 through Friday March 28, SAs are storming the dorms in search of any recyclable items students may have in their dorm rooms, this includes on campus apartments as well.

Senior SA for Wolgemuth Hall Benj Morris said the dorm storm is a time where students can expect SAs to knock on their dorm rooms, collect recycling, sort through trash and answer any questions as to what can and can’t be recycled.

On Mar. 10, Assistant Professor of Sustainability Development Phil Grabowski’s sustainability classes will be sorting through trash on the stage of the LaRita Boren Campus Center during lunch. This action aims to provide awareness for people deciphering between recyclables and trash.

“We should be responsible with the dominion God gives us over his creation, because he graciously allowed us to it, and I think so many people abuse it and don't realize what a precious gift it is,” Lyon said.

At the conclusion of RecycleMania last year, Grabowski reported 3,700 pounds of waste was recycled per week on average. This converted into 12% of all waste per week on campus being recycled.

Since Feb. 2 Grabowski has reported 3,417 pounds of recycling, which looks like 11% of all waste per week on campus is being recycled.

There is still time to get involved.

As of the publication of this article there are four weeks left to participate in this competition.

Currently, the biggest recycling problem comes from the lack of intentional recycling in the Campus Center.

“Even with labels, people have to pay attention and make an effort. Don't put trash in (the recycling),” Grabowski said, “Even if you don't want to recycle — even if you're opposed to recycling for whatever reason — just don't put your trash in the recycling and contaminate everybody else's recycling.”

In an article published by The Echo on Nov. 1, 2019, Grabowski said that once one person decides to throw their salad in the recycling, the whole recycling bin is contaminated and has to be thrown out.

However, recycling is not the only way that students can get involved.

“A big thing is food waste in the DC, it is take all you can eat but make sure you eat all you take,” Morris said.

Morris said turning your lights off and not leaving AC or heat running all the time are other ways students can be doing their part to cut down cost on the university.

Grabowski said that sustainability is about being intentional.

“When students care about something the university responds,” Grabowski said. “So if students really care about recycling we will have the best recycling system in the country.” 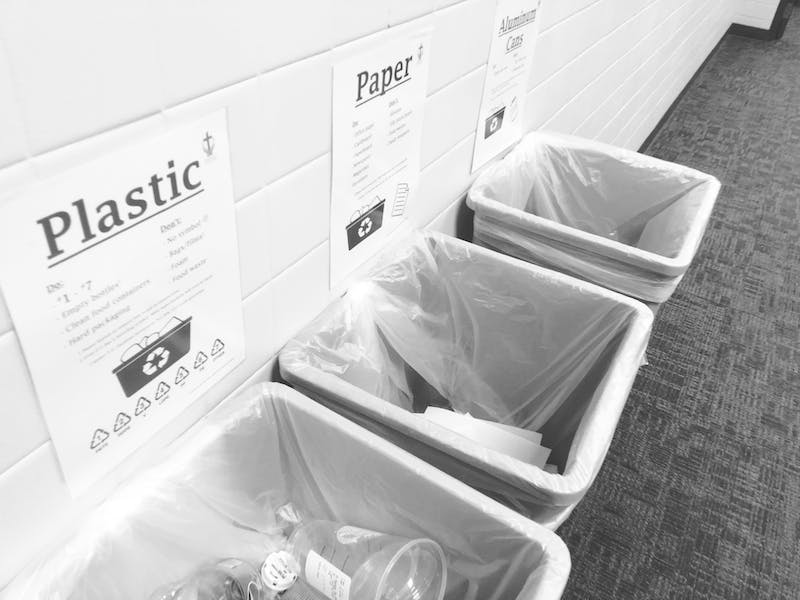 Caring for Creation is about more than just the turtles