Professors of Music Leon Harshenin and Christopher Bade perform together in “Romance without Words.”

Is it possible to say something without using words?

Professors of Music Leon Harshenin and Christopher Bade set out to show it is possible in “Romance Without Words: An Evening of Romantic Instrumental Music.” On Friday, Feb. 21, the two performed a series of compositions centered around love and longing.

“Often times the words in a text can ‘push’ listeners in a certain direction based on the meaning of those words,” Bade said. “Since instrumental music is without text the listener can take a journey without ‘directions.’”

In order to appeal to those unfamiliar with classical music, Harshenin, who came up with the theme, decided the performance should center around a universal topic. By focusing on romance, the music became more accessible to the audience.

Before playing, Harshenin presented on the techniques that musicians use to evoke the emotions behind romance.

“I like building bridges to the audience,” Harshenin said. “I think, just to come out and play music and walk off stage, these days, doesn't go far enough. I think people are not as familiar with classical music as they used to be, and so I feel like it's our responsibility as performers to connect from their experience to the music.”

Starting with some examples from popular music, Harshenin explained several ways music parallels emotion. Songs often delay the harmonic resolution to create uncertainty or blend harmonies from major and minor keys to convey bittersweetness. While explaining these different topics, he played pieces of music on the piano as examples.

After the lecture, the music began. Harshenin played three songs by composer Franz Liszt, who was one of the most important composers of the Romantic era.

“I wanted to pick a composer who was sort of overtly romantic, which Liszt is,” Harshenin said. “Of course, these are pieces I've known and loved for years, so that made the choice easier to narrow down.”

While Liszt had many songs that fit the theme of romance, Harshenin played “Consolation No. 3,” “Vallee d’Obermann” and “The Fountains of the Villa d’Este.”

“I just love listening to Dr. Bade because he's taught me techniques and things and seeing him do it and be able to do all those things and all kinds of pitches,” said senior composition major Tucker Germaine.

This recital was the latest installment of a long-running tradition of faculty recitals. This free performance was a chance for students to see their professors apply their training to the stage and to interact with the arts at no cost. 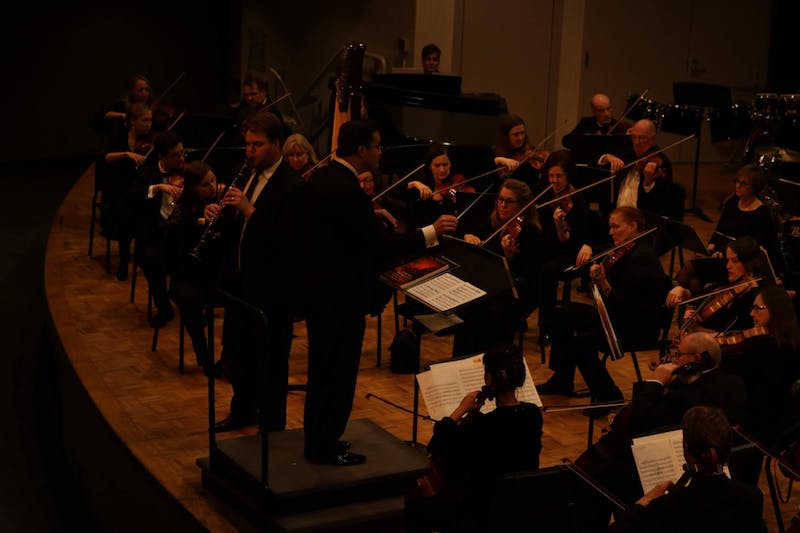