By Sarah Wordhouse
Alumni Jeff Yoder took his experience sports writing for The Echo and for the Indy 500 to start his own publication, The Sportsletter.

More than cents and dollars.

To Donna Downs, co-chair of the communication department, this is what success is. Downs believes success for Christians is loving and acting in a way that is honoring toward God. All of these things, she said Taylor graduate, founder and sole writer of the Sportsletter Jeff Yoder (’14) does ably.

“I’m not surprised that Jeff has started his own business because he has dedication and drive,” Downs said.

Yet, while Yoder was at Taylor, owning a business never crossed his mind.

Yoder created a daily email subscription in 2018 called The Sportsletter, which covers the previous night’s sports occurrences. With the founding of the idea in 2017, Yoder went on to launch it in September 2018, and quit his job of four years at the Indy 500.

Yoder credits this passion for sports writing to his time as the sports editor on The Echo, which Downs was the adviser of when Yoder worked on staff. Yoder considers going to Tayor the best decision he ever made because of his three-year experience on The Echo. Professors like Downs who poured into his life also added to Taylor’s importance to Yoder.

“I think that experience with The Echo was the best experience I had in terms of jobs,” Yoder said. “After four years of being in a secular environment (working for the Indy 500), in downtown Indianapolis and offices, I always kind of reverted back to how much I loved The Echo . . . That was kinda what spurred the idea for The Sportsletter. I just wanted to write, edit, put photos together and make my own sports page.”

Yoder used his discovered love for editing and sports writing to formulate the idea for a business which modeled those ideals. He imagined the concept for The Sportsletter after coming across a daily email subscription called the Morning Brew, which sends email recaps of business occurrences. He realized there was a need for something similar in the sports field.

Starting the business with just 500 subscribers, which included mainly family and friends, Yoder has since grown The Sportsletter to over 90,000 subscribers in roughly 14 months. This growth comes from Yoder advertising in other newsletters and sponsoring Youtube channels.

Despite Yoder’s dedication and hard work, gaining this many readers in 14 months was not something he predicted.

“I didn't anticipate it happening this quickly,” Yoder said. “The goal has always been to grow it to millions of subscribers . . . I think now, (90,000+ subscribers), is a little overwhelming for me just because of how quickly it happened. But, I definitely anticipated (growth). I just did not anticipate it so quickly.”

Yoder is currently experiencing accelerated climbing in numbers, with his most substantial gain in the spring of 2019 with 40,000–50,000 new subscribers.

Even though The Sportsletter is the most rewarding job he’s ever had, Yoder remembers the struggles it took to get to where he is now.

“I would say the first six months or so was probably the hardest thing I've ever had to go through, just in terms of managing budgets, financial investments and figuring out how to get it off the ground,” Yoder said. “But now that it's off the ground, it was absolutely worth it. I don't know what I would be doing if I hadn't pursued it.”

While Yoder has already gotten The Sportsletter moving, the struggle to keep growing his business is a continuous battle for him. He wrestles with being the sole writer and editor and holding himself accountable to those responsibilities. However, Yoder plans to bring on writers and business staff, such as accounting and marketing, within the next five years.

Yoder values being able to control his own schedule; however, he also finds it difficult to organize everything himself with long hours and no separation between work and home life.

In order to combat the weight of the business, Yoder uses his subscribers to hold him accountable.

“When I send out my newsletter in the morning, and after a few hours have passed, I can check my inbox and figure out, ‘Oh, today was a great newsletter; there's not a whole lot of replies,’” Yoder said. “If I make mistakes, there are 80,000 people to tell me about it. But as it started to grow, some of that feedback just helped make me more accountable.”

Because he knows his subscribers will notice if anything is incorrect, Yoder finds himself inspecting every stat, name and link to ensure all details are without fault. This way, he is able to hold himself responsible for the quality of his stories and please his readers at the same time.

Despite the negatives associated with running his own publication, Yoder said his current job is the best one he could imagine.

Through the launch and building of The Sportsletter and the continual battle of accountability and business growth, Yoder said he found a job that is the best he could end up with.

Yoder said he could never imagine himself doing anything else, and to him, that makes the daily upward battles worth it.

“If I didn't have this, I really don't know what else I would be doing, like what job I might have in an office or what publication I'd be writing for,” Yoder said. “But I know 100% that this was God's plan for my life.” 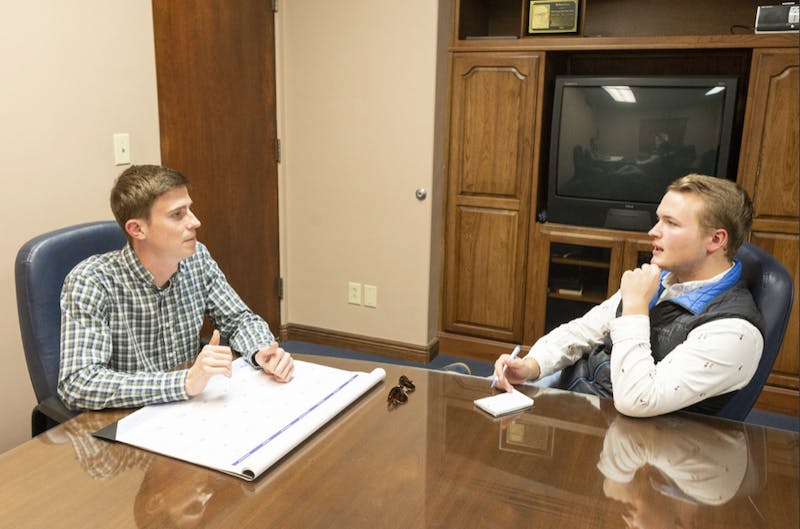