Grace Olson Hall is one of the many dorms that has experienced trouble with bees and wasps.

If only The Bee Movie was a true account, and stinging insects had feelings of compassion and empathy from which to operate. Unfortunately, that is not the case. The wasps have come to Taylor.

Buildings on campus lack some basic necessities such as air conditioning and working fire alarms, but they also have some unneeded additions, namely, wasp nests. Particularly in Olson, Gerig and the Dining Commons, wasps have taken the liberty of moving in.

Accounts of wasp stings have circulated around campus, and they do not sound pleasant.

“There have been wasps everywhere,” sophomore Zoë Mendenall said. “There were three flying in my room and another dead on my desk.”

Mendenall said Terell Gramling, maintenance skilled technician, found another in her bed, but managed to get it off. Outside Olson 141 ― directly below Mendenall ― a water spigot became home to many of the wasps, and the room occupants had to have their dorm quarantined and sprayed.

Mendenall states Olson Hall residents are just now dealing with the overflow. The residents of Olson 141 were moved from their dorm room and into their lounge to avoid any further contact with the wasp swarm.

But Olson isn’t the only hall to be treated for these pests. Sophomore Derek Pinder, who lives in Gerig Hall, says he has found dozens of wasps in his dorm room.

“After I killed about a dozen hornets, I submitted a work request form and a couple days later the Taylor maintenance guy came and found a hive in the ceiling,” Pinder said. “He sprayed about a hundred of them, then said it was too large of a hive for him to get all of them. So we got an actual exterminator a few days later, and he said it was the biggest hive he had ever seen.”

It seems as though maintenance has taken up the task of getting rid of the nests, but these wasps have been a menace in more than just the dorms.

Junior Ross Kimbrell had an unfortunate encounter with wasps while eating in the Dining Commons.

“One minute I had my birks on, the next they were off,” Kimbrell said. “Why? Because an insect inserted its abdominal spike into my left ring toe. Needless to say, it hurt.”

This anatomical description of the event is likely similar to other accounts of wasp stings and close-call encounters.

In the case of a wasp sting, treatment may be necessary.

WebMD gives a detailed guide on what to do should you be stung by a wasp or bee.

“Remove any stingers immediately,” WebMD wrote on their website. “Some experts recommend scraping out the stinger with a credit card. Applying ice to the site may provide some mild relief. Apply ice for 20 minutes once every hour as needed. Wrap the ice in a towel or keep a cloth between the ice and skin to keep from freezing the skin.”

With the large amount of wasps present on campus currently, take precautions when walking from building to building during the day and even inside buildings. If a nest is spotted, avoid it and call maintenance to have it removed. 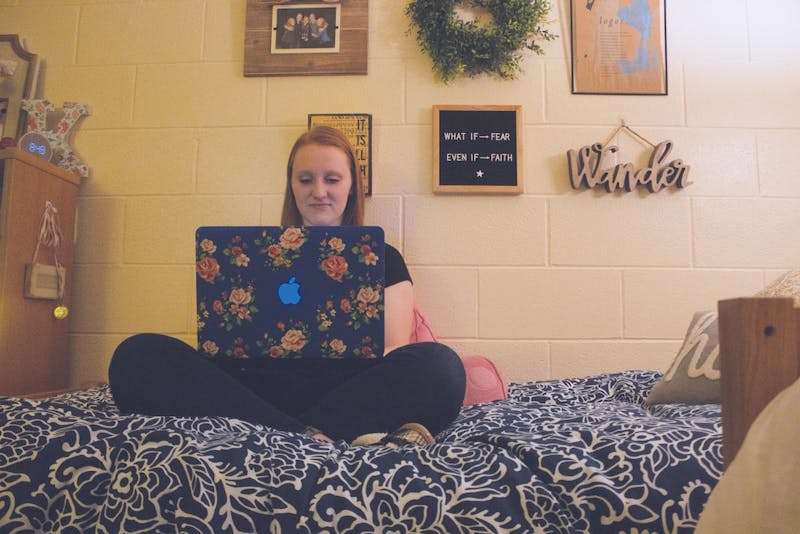